On Tuesday night, after I finally got our baby to bed, I returned to the living room to find the TV off and my partner, Sophie, telling me that she thought I should sit down. All kinds of things run through your mind at that point, but I certainly didn't expect her to quietly say: "Joel Lane has died".

Joel was a writer I had known through his work from 1994 onwards and had met and spoken to on several occasions from 2003 onwards. It's hard to understand how such an overwhelming sensation of loss and grief can come from the death of someone that I could hardly claim to 'know' in the 'friend' sense of the word, until I realised that his impact was far greater than a simple friendship might have been. Because I also knew him through his work, through the intensely brilliant and often very personal short stories that were charged with the inner visions that defined him, and through the respect that I had for him due to the honesty and integrity with which he wrote and conducted himself.

My first published story, "Pussycat", in the 1994 Barrington Books anthology, "The Science of Sadness" edited by Chris Kenworthy had introduced to me a group of like-minded individuals that I hadn't even known were in existence at that time. These included Nicholas Royle, Conrad Williams, Tim Nickels, Brian Howell, and Joel Lane. His story "Like Shattered Stone" in that anthology is one that I've never forgotten. And in the anthology as a whole, I think it's not too extreme (or even ridiculous) to suggest that I had found family. Whilst I didn't attend conventions until I began publishing as Elastic Press in 2003, between 1994 and that date I had read the work of these independent press writers avidly and felt that the cohesiveness of their body of work (both collectively and individually) expressed my own feelings and desires, and in turn, impacted on my own writing.

I met Joel at FantasyCon 2003 where I had an Elastic Press dealer's table for the first time. A somewhat reticent man in black shirt, blue jeans, and carrying a carrier bag of books examined all I was selling and then bought the lot. I remember glancing at the name badge and realising it was Joel and then having a bit of a fanboy moment and gushing something along the lines of "You're Joel Lane!" It's rare that I get such a feeling of inexpressible admiration - and I've subsequently met a lot of people who I admire and respect, in both literature and music - but thinking back to that first meeting today it indicates how enamoured I was of his work.

I was lucky enough to publish Joel's short fiction twice with Elastic Press (in anthologies both edited by Allen Ashley), and also very happy that he agreed to write an introduction to my story collection, "Beyond Each Blue Horizon", back in 2005. Within the introduction was a line I re-read yesterday that seemed to summarise his own fiction:

Joel was a writer who was very socially aware of the power fiction had to both reflect and comment on the times. Perhaps more than that - he felt it imperative that it commented on injustice wherever it occurred. His work co-editing the anthology, "Never Again", is an obvious illustration of this, and the fact that he was editing an anthology of austerity-themed stories before his death is another reflection.

He emailed me asking if I could write a story for the latter book in September this year. Whilst I did so, and he acknowledged receipt, I guess I will never know if he read my hopeful contribution. I very much wanted to get into the book because it mattered to me that Joel would get my story. Joel was someone whose opinion I wanted as a writer. He was part of the family.

Joel had mentioned in his email that he had been diagnosed with a sleep problem and was taking medication which unfortunately meant he was sleepwalking and having fits and problems with concentration. That email on the 9th October was to be my last communication with him - I mentioned I hoped to see him at World Fantasy in Brighton in November but unfortunately his mother was ill and he couldn't attend (I think he would have been staggered at the whoops which resulted when it was announced his collection, "Where Furnaces Burn", had justly won a World Fantasy award). He also mentioned he hoped to write a story for the punk anthology I am editing, based on Joy Division, epilepsy, and their song "She's Lost Control". It would have been stunning, I'm sure of it.

However, I am glad I made the effort to attend the launch of the Eibonvale Press anthology, "Rustblind and Silverbright" in London in August, as it was the last time I would see Joel. Even if I can't recall the details of our conversation - it was just good to see Joel again. As it was always good to see Joel. And Joel's support, mutual respect, and enthusiasm for the genre was ever present.

Despite those early days of that Barrington anthology which lauded Slipstream as the new genre, Joel always considered it was horror that he wrote. Even when his story, "Alouette", was published in "Subtle Edens" (Elastic Press's swansong publication dedicated to slipstream) he knew it was really horror. We had these discussions from time to time, always with wit at the heart. In my copy of his Nightjar Press chapbook, "The Black Country", he inscribed it with: "To Andrew - Maybe horror is the new slipstream! - Joel x".

I think it's clear to say that Joel was a respected and much loved member of the genre community. The outpouring of shock and grief on facebook, discussion boards, and emails since his death is tantamount to that. I wish I knew him more than I did, I regret that I won't get the chance to do so. I wish there were more conversations and more stories to read. I wish Joel were here.

Writing is such a solitary profession - and within it Joel seemed more solitary than others - but as mentioned above I have certainly found it to be family. In Graham Joyce's acceptance speech for his British Fantasy Award for best novel this year he touched on it beautifully, and this is the same message which has been repeated in all the discussions since Joel's death. I would go further to state that it's actually more important than family - my own family will never know me to the depth that those writers do who have read my work. Our community is a family that knows us intimately and accepts us for what we are, through our work which reflects, illuminates, and lays bare our inner selves. That's why it hurts so much when one of us passes. And Joel reflected, illuminated, and laid bare vividly, with great compassion, incisiveness, and - in conversation - humour. This is why he will be missed. Although acknowledging this doesn't stop the tears from flowing. 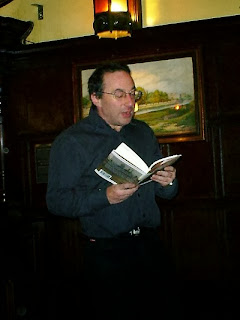