Autumn Horror In The East 2

Following the recent World Fantasy Convention where 1500 attendees descended on Brighton for their annual literary and social fix we attended a scaled down version of the same thing at Lowestoft this weekend, the second year of Autumn Horror In The East. Not dissimilar to WFC in many ways, this also saw the general public outnumbered by the writers and whilst it would be unfair to extend the comparison too far it was interesting to have sold more items at the quieter event than we did at the larger event (although the fact we were manning a table here of mixed goods including Sophie's home made jewellery made a difference as well). 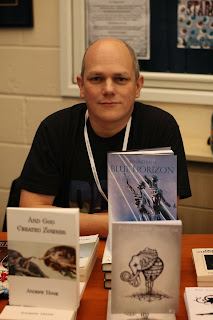 Lowestoft is a perfect location for a horror convention as even in the best of lights it seems apocalyptic, both architecturally and in the form of the general populace, but the location of the venue was a little out of the way to attract the casual attendee (even a free event has to be obvious). Even so, the authors who were there (Adam Millard, Darren Barker, Adam Baker, Joseph Freeman, Nat Robinson, Paul S Huggins and David Moody amongst others) were ready to entertain the attendees on the various panels, and in the afternoon a special screening of the 1992 BBC programme Ghostwatch was scheduled with a Q&A afterwards with Ghostwatch 'biographer' Rich Hawkins and the director, Lesley Manning - quite a coup! 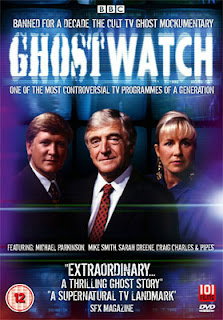 Like all of these events, it's just good to mix with people who are on the same wavelength as yourself even if I am at the lesser end of the horror spectrum. I had an interesting chat with Joseph Freeman in particular about the changes in publishing over the years (we reminisced about Nasty Piece of Work magazine in particular), and David Moody as usual had several insights in how he works the industry rather than the other way around. The panel I was on with Adam, Joseph and David discussed this in detail. 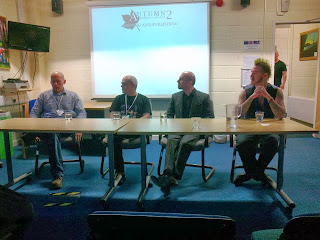 The Ghostwatch screening was good to watch. I remember it vaguely when it was broadcast and seeing it 21 years later some of the cracks are evident, some of the acting a little too obvious, but the overall effect is one inspired piece of television with the repeated setting up and demolishing of viewer expectations a fascinating examination of how we interact with television, and the breaking of the bond of trust between viewer and presenter. My favourite moment in the programme is where we realise the 'live' camera view of the haunted house is actually a moment from earlier and therefore there is no live feed into the house and what might actually be happening is unknown. Unfortunately we had to leave part way through the Q&A session due to childcare issues, but on the face of it - despite the low attendance - the event was a success for those who were there, and hopefully the organisers can build on this at a proposed new venue next year.

I, for one, will be returning.