Last weekend saw the annual World Fantasy Convention arrive in Brighton, only the third time in its history that it's been held outside of North America. I usually spend this time of year at FantasyCon (the British Fantasy Society's convention), but as it was shelved this year due to World Fantasy it was a no brainer to attend. It's always encouraging to spend a weekend with like-minded literary folks - many of whom are great friends and acquaintances - and to re-charge and reaffirm the creative impulse.

Whilst the convention began on the Thursday afternoon we weren't due to arrive until the following day, however our convention did begin on Thursday in some respects. I had the day off work so we were able to drop my eldest child at one set of grandparents that morning and then handed off our youngest at a halfway point at Peterborough with her grandmother who lives in Leicester by lunchtime. Returning to Norwich we had time to do a little packing before heading out to watch F W Murnau's "Nosferatu" at Cinema City. It was great to see it on the big screen - despite the irritating and inappropriate giggling of some audience members - and whilst the score wasn't as good as a version I saw on Channel 4 many moons ago, it was interesting to hear a different musical background. Because it was Hallowe'en and we were feeling particularly mischievous, we dusted off the penguin mask I use to promote Ponthe Oldenguine, and Sophie wore it into the cinema whilst I donned it on the way out. No one batted an eyelid. 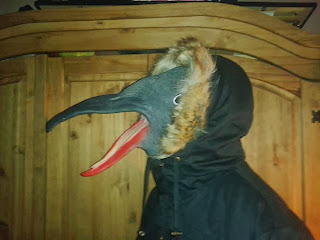 Onto the convention proper. The drive to Brighton was uneventful and we arrived around 11:30 at our hotel (The Black Lion, at a third of the convention hotel price!) just north of Brighton at Patcham. A quick bus ride and a blustery walk along the seafront saw us reach the Hilton Metropole where the convention was being held. The estimated audience over the weekend was 1500 and it was indeed packed. We signed in, collected our free books, and headed off to my spiritual home in the dealer's room where we met up with Roy Gray of TTA Press and had a little bit of table space to sell Fur-Lined Ghettos. We wandered around the room, chatting to David Rix of Eibonvale, Quentin S Crisp of Chomu, Ian Whates at NewCon Press, Steve Upham of Screaming Dreams (who promised that my collaborative story collection, "Slow Motion Wars", written with Allen Ashley should be out before the end of the year), and Michael Kelly from Shadows & Tall Trees who I didn't spend as much time with as I would have liked.

There wasn't much on the programme that I actually wanted to attend, but there were people I wanted to make sure I didn't miss. To guarantee I met up with Kaaron Warren we headed to her reading where she read her story "That Girl". Not only was the reading excellent, but she handed out Koala bars to sweeten us. I originally published Kaaron in The Alsiso Project back in 2004, but this was the first time we had ever met. After the reading we found the 'secret bar' and had a drink with her along with Mihai Adascalitei from Romania, chatting like we were old friends. It got the convention off to a relaxed and friendly start. 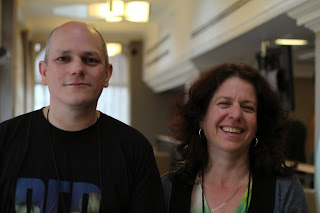 I think from there we headed back to the dealer's room, talking briefly with Mark West, Stuart Young, Neil Williamson, Terry Grimwood, Gary Couzens, Allen Ashley and Sarah Doyle, and no doubt many others. Getting hungry by this stage and wary of forecast rain, Sophie and I headed out on our own and found a Wetherspoons to scoff in before returning to the convention and wandering around the mass-signing event. It always seems like there are conventions within conventions at these events, and the number of fans seeking autographs felt much different from my personal convention experience. Nevertheless, I ended up signing a few convention programmes myself, and we also managed to catch up with Ray Cluley and his partner Victoria Leslie (who writes as V H Leslie) for a chat. One of my favourite convention moments was Victoria's surprise at my mention of an age-gap between Sophie and myself (inadvertently either flattering me or insulting Sophie) and her further surprise that the gap is 21 years. My attic portrait must be worth it.

We concluded Friday flitting from one room to another, talking to Joseph D'Lacey and Charles Rudkin, taking in the two bars and the free drink at the Gollancz party, but by 11:30 Sophie was dead on her feet and during a conversation with John Travis and Simon Clark she actually fell asleep standing up. We decided to make the most of tomorrow by getting an early night and took a short taxi ride home.

Saturday morning we decided to wander around Brighton before heading to the convention aware that if we didn't make time for the town we'd never see it. We wandered about The Lanes, and the much better Laines areas, before returning to the convention hotel before 12. Back in the dealer's room we finally caught up with Doug Thompson and Nina Allan and had a long chat about good things, not surprising as they are amongst our favourite people and writers. I also exchanged a few words with K J Bishop and picked up her new collection, "That Book Your Mad Ancestor Wrote". Sophie also bought a couple of titles from the Chomu Press table. We then headed to the signing alley where I picked up Steve Volk's "Whitstable" that I've been wanting to buy for some time, and chatting to Simon Marshall-Jones of Spectral Press. It was now late afternoon and we were starting to get tired again, so we sat in the dealer's room for a bit whilst we wondered where to eat. Doug was trying to arrange first a Texan then a Greek restaurant by leaving the hotel, talking to threstaurantnt, and then returning to say it was full. Sophie suggested it might be easier using the internet, and within a few moments a posse of us were straining into the wind along the seafront and into The China Garden where we moved from one table to another as our numbers increased. Our final group included Sophie and myself, Doug Thompson, Quentin S Crisp, Jet McDonald, Anna Tambour, John Travis, David Rix, Brendan Connell, Terry Grimwood and two others whose names I'm not sure about. The food was ok, but it wasn't long before we were battling the elements again and were just in time for the poetry readings hosted by Allen Ashley. 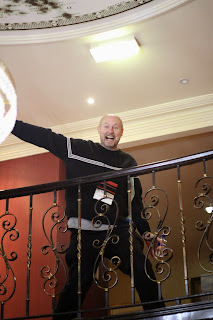 We'd neglected to get ourselves a two-poem spot, but we were amongst the reserve list and Sophie was fair terrified when her name was called but I think she did pretty well with it. I also read one of our collaborative pieces. Overall, it was a great event which Allen ended with a flourish. From there it was into the main bar where we were lucky enough to find somewhere to sit. From 10 until 2:30 we chatted with Doug, Allen, and Sarah Doyle. Doug had an idea that everyone could be distilled into one word. His word for me was 'workman-like', but on reflection - and no doubt he will disagree with this - I've refined it to 'dedicated'.

Sunday morning we awoke relatively refreshed and were back in the Con hotel just after ten and a rather brisk walk along the seafront. Back in the dealer's room we mingled there until it was packed away at midday (we had sold a good amount of Fur-Lined Ghettos, including the last copy of issue one which is now out of print). Nipping out for some lunch we returned to the bar and chatted with Allen, Terry Grimwood, and David Rix until the awards ceremony began at 3pm. From the public gallery which overlooked the event we had a great view of those who had banqueted beneath. Without going into too much detail we were delighted that Ray Cluley won the British Fantasy Society award for his story, "Shark! Shark!", were moved by Graham Joyce's acceptance speech for the BFS's Best Fantasy Novel, "Some Kind Of Fairytale", and very much pleased by Joel Lane winning Best Collection in the World Fantasy awards. John Probert's humorous acceptance of the novella award and Jonathan Oliver's fantastic "fuck me sideways" comment whilst accepting the best anthology award all added spice to the event. In fact, all the awards seemed thoughtfully given (apart from the appalling Cabin In The Wood's award for best screenplay).

We milled about in the dead dog party for a little while, congratulating the winners (especially Ray, Graham, Jonathan Oliver and Adam Nevill), and managing brief chats with Lynda E Rucker and Lavie Tidhar before finally leaving the convention and waiting for a final taxi. We weren't leaving Brighton until the Monday morning, but our convention was now over. We returned buzzing with ideas - some will no doubt become evident - having enjoyed a great convention whilst not really participating in the programming. As I said, everyone's convention is slightly different from everyone else's, but ours was definitely worthwhile. As Graham said, it is family. Family which we should get to see more often. 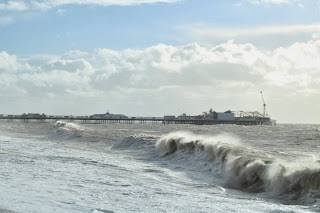 (apologies for giving up on author links halfway through this blog. I ran out of time and inclination. Apologies also to anyone we chatted to and who I've missed! All photographs are by Sophie)
Posted by Andrew Hook at 16:17