Please bear in mind this post will contain spoilers, both written and visual, of my story, "Tetsudo Fan".

When Eibonvale Press announced guidelines for a new anthology of train-themed stories I knew I would be interested in writing something for submission. Themed anthologies - when done well - can represent the best in short fiction in my opinion, forcing writers to consider ideas that they might not previously have had, and opening up a wellspring of creativity. The only problem I foresaw from my point of view is that other than enjoying train travel I had no particular affinity for glamorising those journeys. I don't consider myself a 'trainspotter' and wondered whether the anthology might lean toward that kind of aficionado.

Nevertheless, I began to consider ideas. A few options sprung to mind, including writing something about Stalin's unfinished railway after reading an article which coincidentally appeared at the time the guidelines were announced. Another idea, which unfortunately I can no longer remember, also seemed viable. What I decided I didn't want to do was to go down the hokey steam train track - however evocative that might be - and so considered with my train-uneducated mind what the opposite - most modern - train might be: my first thought being the Japanese bullet train (even though, I realise now, they have been around for quite a considerable amount of time).

The bullet train seemed an attractive starting point as I'd written and had published quite a few stories set in Japan. But I needed an angle. Google beckoned. I typed "Japanese train fetish" and waited...

As soon as I saw this I knew I had my train story.

'Tetsudo fan' is the nearest translation for 'trainspotter' in Japanese. I researched the types of trains and the culture of trainspotting which might appeal to my main character. I discovered the Little TGV bar in Akihabara where the diners are welcomed as though they are going on a journey and found the Hara Model Railway Museum that had only opened days after I began to write my story. I found details of Japanese comics which would appeal to train enthusiasts, and information about hotels which directly overlooked railway lines. All this information seemed to be pulled through at the same time, to paraphrase Kafka it seemed that "the [story] will freely offer itself to be unmasked, it has no choice, it will roll in ecstasy at your feet". Or, to use an appropriate metaphor, all these individual story train tracks seemed to converge to make one story: the station of my ideas. 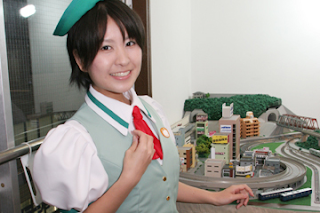 I find it fascinating how an idea can emerge almost fully formed simply by applying a little imagination and seeing what happens. Some writers view stories like archaeological digs, as though they are unearthing something that has lain hidden from view all the time and was already fully formed before they started. I'm more struck by the impossibility of ideas, by the certain knowledge that if I had written the story five minutes earlier or five minutes later that the story itself would be completely different - in some instances, possibly beyond recognition of the one that was written. Add the internet to this and the usefulness of searching for reference material as one writes, then the story itself becomes a sea of twisting possibilities. For example, searching 'Japanese train fetish' today I found information about an "image club where men can pretend they are in a train groping fellow passengers". Would that have been useful in this story? Possibly. Would it have derailed what was eventually written? Maybe. A story in itself is a journey with limitless destinations, but the finished version is the one accepted as true. I find this almost arbitrary, akin to millions of sperm racing toward an egg, and the thought both excites and horrifies. What happens to those unwritten stories, those unborn babies, and the trajectory of their fates? But I'm getting off topic. The book, "Rustblind and Silverbright", is out shortly, to be launched at this event in London. See you there. Are you coming by train?