As has become customary I'm making blog posts each time a story of mine gets published in order to give a little background as to how the piece came about. This time it's the turn of "Bullet", now available to read in issue #34 of the excellent Black Static magazine. Please note, this post will contain spoilers so if you have the magazine it'll be best to read this afterwards. 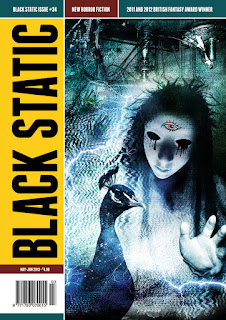 Very occasionally, story ideas come out of dreams. The ending to my story, "Beyond Each Blue Horizon", came at the denouement of a dream where I opened the curtains and found an entire city had been erased. Over the years, I've nicked bits and pieces of dreams for other stories, although I think it's important to ground them in reality and not simply - to paraphrase surrealist film director Luis Bunuel - to pad out the fiction. In this case, the thrust behind "Bullet" came specifically from a dream. I remember I was travelling in Thailand searching for someone I had lost. I believed I held a guidebook in my hand, but when I glanced down to see what I was holding I saw it was a copy of the novel "Bullet" by Franz Kafka.

Now, obviously, Kafka never wrote a book called "Bullet", but it crossed my mind what it might have been like if he had. That sense of altering reality that I got from the dream intrigued me, as did the search for someone. I put the idea to one side and waited for something else to happen (generally I get two ideas which mesh as one story) as it usually does.

Some time afterwards I read a news story about an island which has appeared on nautical maps for decades but which in fact doesn't exist. As part of the article it mentioned that some cartographers deliberately add false streets to maps in order to protect copyright (what a fantastic idea, that information can be falsfied by those I would have thought are sticklers for precision!). Of course, putting together the dream, the false map, Kafka's missing novel - which acts as an indication that what we are reading might not actually be true - and the missing person suddenly drew the story tight like a drawstring. I had everything I needed: location, purpose, misdirection, and my favourite device, the unreliable narrator. Just how much we shape reality from our experience is something that has always interested me, how we seize on the familiar to try and understand the unfathomable. I guess this is the heart of the story, although it is open to several readings.

The artwork accompanying the story perfectly encapsulates the piece, in my opinion. Courtesy of Richard Wagner. 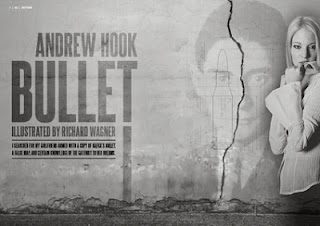 Finally, the entirety of "Bullet" was written whilst listening to the album titled "Blonde" by the wonderful Coeur de Pirate on repeat. If you've read the story and enjoyed or hated it, please feel free to comment.
Posted by Andrew Hook at 09:38