Once again here's a blog post about the gestation of a recently published story, this time "The Caged Sea" which appears in #4 of Unspoken Water magazine.

When writing I always need a title before I can begin a story, and in some instances the title itself is the spark for the story. In this case, the title came to me whilst at the coast (unsurprisingly I guess), whilst I was stood by some steps on the sea defences. The platform at the top of the steps implied a cage over the sea, as seen by this photograph. I made a note of the title and filed it in my memory for later. 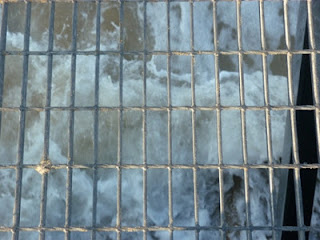 I knew the title would act as a metaphor rather than to be used literally. After all, what can cage the sea? By it's very nature it cannot be held by bars. But as a concept I knew I could work with it. As with many of my stories I generally need three elements to converge in order to have a workable idea. One of these is always the title, and in this case I became aware of two other ideas which I knew I could work together as one. These were:

1. Everyone knows of the concept of déjà vu, but I had only recently become aware of jamais-vu. Wiki summarises it nicely: Often described as the opposite of déjà vu, jamais vu involves a sense of eeriness and the observer's impression of seeing the situation for the first time, despite rationally knowing that he or she has been in the situation before. Always obsessed with ideas of the perception of reality I knew this discovery would provide fodder for a story. I just hadn't been sure how to use it. 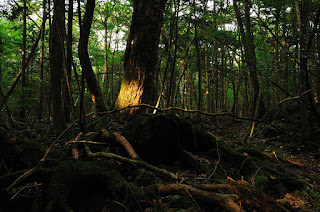 2. I had also been intrigued by stories of Aokigahara, a forest in Japan which is a popular place for those wishing to commit suicide. I've written several stories set in Japan, and again this concept was floating around my head waiting for something to harness it to. Doing some research on the topic I found that Aokigahara is also known as the Sea of Trees. Often in moments like this I wonder if there is an overseeing force teasing stories out of me, because "The Caged Sea" was obviously the perfect title for this story. It wasn't long before the concept of jamais-vu adhered itself and I realised I could work everything together.

Once these three elements were in place I simply added a seemingly solid yet potentially fractual relationship and the story was born. Of course, you'll have to read it to determine if you think it was effective and how it all came together. Unspoken Water #4 also contains stories and poetry by Mike Chinn, Marion Pitman, Lee Clark Zumpe, Derek Muk, Rebekah Memel Brown, Brian M. Milton, Richard King Perkins ll and Stephen Palmer.