It's been a while since I made a post about my favourite kind of animal - those with particularly elongated snouts - so what better way to celebrate the 1st May than by showcasing an animal whose very name is derived from a word for snout?

Of course, it has to be the proboscis monkey: 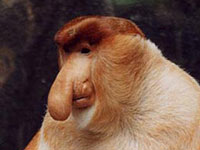 I remember my first encounter with the probsocis monkey as a stuffed animal in the natural history collection at Norwich Castle Museum. This exhibit might even have initiated my love for long-snouted animals - who could fail to be enchanted by such a being.

From wiki: "The proboscis monkey (Nasalis larvatus) or long-nosed monkey, known as the bekantan in Malay, is a reddish-brown arboreal Old World monkey that is endemic to the south-east Asian island of Borneo. The monkey also goes by the Malay name monyet belanda ("Dutch monkey"), or even orang belanda ("Dutchman"), as Indonesians remarked that the Dutch colonisers often had similarly large bellies and noses." 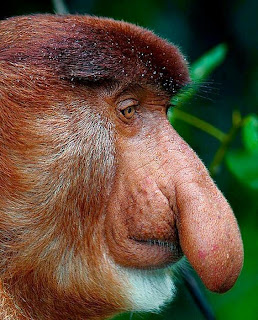 I love that wiki also goes on to explain: "This species of monkey is easily identifiable because of its unusually large nose." Although I do prefer the word snout.

Ladies and Gentlemen, I give you the proboscis monkey: 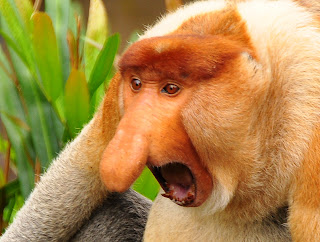 Just gasp at the size of that snout!﻿
Posted by Andrew Hook at 10:36