I don't normally blog gig reviews, mostly because I find I have little to say. Nowadays I tend to have the time/money only to see bands I know I'm going to like, so gig reviews would probably be restricted to effusive gushings that only diehards would be interested in reading. But then, of course, there will always be exceptions. And the exception here are The Fall.

I've seen them around half a dozen times since the mid-eighties. Most of their gigs begin with myself wondering why I've turned up, then suddenly something twists and I'm caught in a primal whirligig of relentless repetition, the music building on itself layer after layer, with Mark E Smith's barely discernible vocals/rant surfing the sounds whilst he himself resembles a dementia patient wandering around disorientated after escaping from a nursing home. Last night at The Waterfront in Norwich was one such gig.

But it wasn't just The Fall. Opening act Dingus Khan are an 8-piece band with three drummers and three bassists, an astonishingly happy frontman wearing your gran's calf-length purple nightdress, and an impressive set of tunes bordering on madness interspersed with whistling and extremely silly dances. Everything that's wrong with modern day pre-packaged music isn't wrong with Dingus Khan. Their jubilence was catching and I loved them. 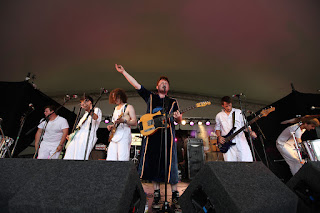 Unfortunately there was also a second support act, There's Someone In The Pond. Bassist, guitarist, female drummer (resembling Noel Fielding); all the components were there for a top act, but when the first song started and I thought 'this sounds familiar' it quickly became apparent that all their songs sounded familiar because they had ripped off every riff you could think of and done nothing original with it. Their music was bland and I hated them.

And then we have The Fall. Keyboardist Elena Poulou arrives on stage, takes off her coat and lays it over some luggage she places on a chair beside her Korg. The other band members start playing, and shortly afterwards Smith stumbles and mumbles onto the stage, walking aimlessly fiddling with microphones and amplifiers, stands with his back to the audience, gives an occasional - piercing - direct look, sits at the back of the stage, and oversees proceedings like the bandleader he is. The music grows and is intense. Culled mostly from new album, "Re-Mit", the surprise of "Theme From Sparta FC" is welcomed heartily, and "Bury" from "Your Future Our Clutter" also rocks as does "I've Been Duped" from "Imperial Wax Solvent". Before the end of the set - who knows - Smith walks off, and after several long minutes the band return without him, Poulou mentioning something about him not wanting to work with those microphones. 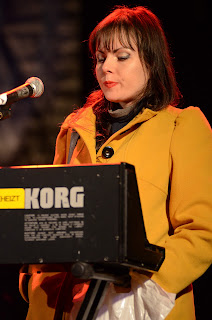 What follows is structured anarchy. The band launch into "Reformation!" with the microphones handed out to members of Dingus Khan who have been in the audience for the gig. They enthusiastically shout "Reformation!" at the required intervals whilst the band ploughs on. Then they stage invade, Poulou leaves, security arrives, and a struggle ensues as they are wrestled to the ground against the beating drum bass guitar soundtrack. One is ejected but not before handing the microphone to another audience member. It wasn't beyond the realms of possibility that the microphone baton could be taken up by everyone in the audience until each were forced to leave the building leaving the band continuing "Reformation!" until the end before an empty auditorium. In any event, the song must have been extended by a good five minutes.

This is what gigs are supposed to be like. It crossed my mind that The Fall would have been buzzed off within ten seconds by the general public and their hideous facades on something like Britain's Got Talent. But Britain does have talent. And that talent is lead by Mark E Smith of The Fall. 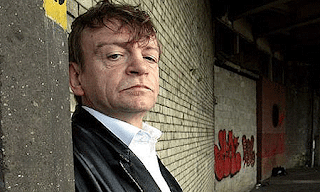 So this is why I don't blog gig reviews because it's turned out to be sycophantically effusive anyway and still hasn't managed to capture the joy of being there. Oh well, as a counterbalance I should mention my tinnitus seems to have worsened. That's the pay off. And I had earplugs in too.
Posted by Andrew Hook at 12:33