The Day The World Turned

My short story titled "The Day The World Turned" has just been published in the anthology, No More Heroes, edited by Ian Whates, and as usual I'm writing a few words discussing how the story came to be written. There may be spoilers within.

I was invited to contribute to this anthology which wanted SF/F stories inspired by artists who have left us too soon. If the remit was given now, I would probably have chosen The Stranglers' keyboard player, Dave Greenfield, who unfortunately died of a Covid-related illness in 2020, however this anthology has been a while in the making and those circumstances had yet to pass. This isn't to detract from the chosen subject of my piece, the singer Poly Styrene from X-Ray Spex, whose album, "Germfree Adolescents", is in my top five records of all time. 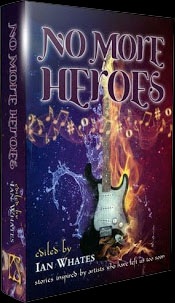 Poly unfortunately died of metastatic breast cancer on 25th April 2011 aged only 53. I wanted my story to reflect the breadth of her life, from childhood through to punk through to Hare Krishna convert. In particular, I wanted to build on her experience of seeing a UFO after leaving a gig in Doncaster in 1978, which had a profound effect. Poly felt objects crackling when she touched them, and believed she was hallucinating. I thought it would be interesting to focus on this incident, when reality changed, when something beyond music called to her. Riffing off the song title, "The Day The World Turned Day-Glo", I thought "The Day The World Turned" to be a fitting title for this piece.

My piece isn't meant to be entirely factual, but I hope I've caught the spirit of Poly and her influences in my story. The story is chock-a-block with instances and references to Poly and the time period which I hope the casual reader will appreciate, but which will also spark like beacons to dedicated fans. 1976 was a leap year. Indeed. 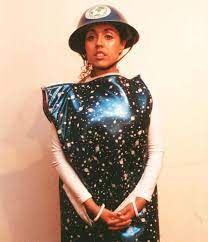 Here's an extract: Stagelights backcomb her hair as a dandelion clock. She turns and notices her shadow against the wall by the mixing desk. A curious excitement pitches her insides. Live music is really something. She is fifteen again – squatting, shotting. Within the darkened environment – challenging the sun which will hang fire another one hundred and fifty minutes – distinctions are levelled. Everyone is here for one thing. Camaraderie in numbers.

I usually listen to music when writing a short story, and of course in this instance I wrote whilst playing  the album "Germfree Adolescents" from X-Ray Spex on repeat. For further reading, you might also want to check out Unconscious Consumer: X-Ray Spex and the Day-Glo World that I wrote for Sein Und Werden magazine in 2015. 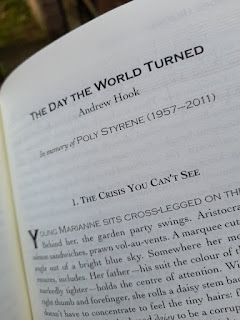