Where Do Broken Dreams Go?

My short story titled "Where Do Broken Dreams Go?" has just been published in the anthology, Professor Charlatan Bardot’s Travel Anthology to the Most (Fictional) Haunted Buildings in the Weird, Wild World, edited by Charlatan Bardot & Eric J. Guignard for Dark Moon Books, and as usual I'm writing a few words discussing how the story came to be written. There may be spoilers within.

Unlike most of my short fiction, the gestation period for this story is very long. I originally wrote it in March 2015. I had what I thought was a strong opening, but this version then meandered and ended on a note so ambiguous that even I didn't understand it. This isn't necessarily a bad thing, but it certainly was for editors because I just couldn't place it. Fast-forward to October 2020 and due to various reasons I hadn't written fiction for over a year (mostly because I was working on a big non-fiction project, but also because I'd hit a slump). The writer, Eugen Bacon, had recently discovered my work (and was enjoying it) and she suggested I submit to this travel anthology of haunted buildings. Spurred on - but not having a new idea - I was idly scrolling through my unsold stories and realised that there is a haunted building (of sorts) in this piece. I decided to write a second part to the story where my main character revisits the scene of the first part - just as I was doing in the writing of it. This version of the story was much stronger, and I was overjoyed when it was placed in this anthology. For those who like facts, the original version was 2225 words and I added 655 for a final word count of 2880. This gap of six years between the starting and finishing of a story is the longest I've ever had to make. 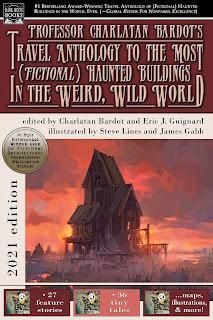 Clearly, as you can tell from the title and my description above, the anthology's remit was for haunted building stories, but not haunted house stories. I had been inspired by this news story regarding a village in Kazakhstan where villagers en masse had developed a mysterious illness that sent them into comas, sometimes lasting days on end. In my story I sent a photographer there to photograph the abandoned buildings. It is an experience within one of them that curiously affects her and drives the story. Whilst - of course - I've fictionalised this and created more ambiguity that there previously was, I think I've left it off-centre enough for it to be sufficiently unnerving without enforcing explanation.

Here's an extract: My dreams were gracious. I saw antelope and willow trees. Familiar figures spoke to me in guises I didn’t recognize. A lover or past lover or soon-to-be lover took my hand in his. Our palms were smooth, the backs hairy. I plucked those hairs and placed them in an iron suitcase. Just as it was getting interesting, I woke.
Timofei stood in the corner of the room. I smelt a thick stench of urine, and as I saw him turn I caught sight of him zipping up his trousers. I closed my eyes. The vestiges of the dream remained, ethereal tendrils. If I let myself go I would be pulled back into the arms of my lover, I would continue the dream as though it had been paused like live television. But now I was aware of Timofei, I couldn’t allow myself to sleep.
He saw me open my eyes. Watched as I rose unsteadily. Sergei remained on the floor. I coughed. I realized the light in the room had changed. The hum of a generator pricked my consciousness and then I realized Timofei had installed two arc lights in the open space. I no longer held the flashlight, and when I looked to the floor I saw it was switched off. At the windows, darkness pooled. 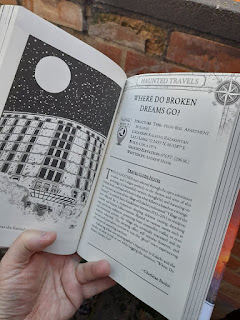 I usually listen to music when writing, and my records show that the first part of the story was written to Section 10: A Long Day, on repeat, from “The Beginning Stages Of...”, the first album by The Polyphonic Spree. I didn't listen to music whilst finishing the story.
"Professor Charlatan Bardot’s Travel Anthology to the Most (Fictional) Haunted Buildings in the Weird, Wild Worlds" is published by Dark Moon Books in paperback, hardback and e-book. There are a vast number of eminent contributors (63 in total / 452 pages long!) which you'll see from the image below. The book itself is a cornucopia of information about each story, is grouped into geographical regions, and features artwork from Steve Lines and James Gabb. 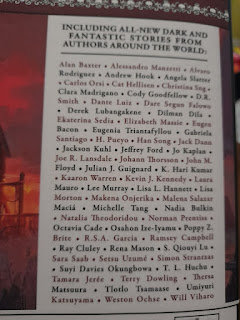