So I've decided to set up my own crime publishing company to not only re-publish some of my older crime novels and new work, but also to create the opportunity for other crime writers to join me on the same journey. The result is Head Shot Press. The focus will be on paperbacks and e-books, with the first five titles now available. As these are all my books so far, I wanted to explain why I've gone this particular route. 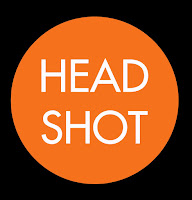 It was in 2004 that I wrote my first crime story, "Alsiso", which was published in the British Fantasy Society award-winning anthology, "The Alsiso Project", which was also edited by myself. "Alsiso" introduced Mordent, my ex-cop turned PI who sees the world through noir-tinted glasses and has a bubblewrap fetish. Being a fan of Raymond Chandler (who admittedly is more hard-boiled than noir) I wanted a PI who utilised all the descriptive prose associated with the genre, coupled with wise-cracks, black humour, etc, whilst also telling a good story. Following "Alsiso", whenever I had an idea for another crime short story it made sense to use the same PI. As such, after four or five stories, I realised I had the springboard for a novel, and shortly thereafter I wrote the first in the series, "The Immortalists", which - together with the second in the series, "Church of Wire", was sold as a two-book deal to Telos Publishing with these appearing in 2014 and 2015 respectively.

Telos (the team of Series Editor Samantha Lee Howe, together with David Howe and Stephen James Walker), did an excellent job editing those two novels, sourcing some appropriate artwork, and doing their best to promote the books accordingly. Meanwhile, I wrote a couple of other Mordent novels, "People I Know Are Dead" and "The Happy Finish". However, as the first two books didn't sell as well as Telos were hoping, they decided not to offer a deal for those latter titles, and after a while the rights reverted to me and I decided to retain them. 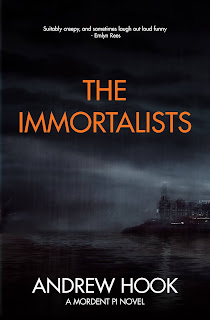 With the rights to all four books back in my possession, I made concerted efforts over the next few years to sell them again. The difficulty being that few publishers seemed interested in a series which hadn't quite taken off, which had stalled at the midway point, or they weren't keen on taking on the two latter novels if it meant they would also need to reprint the first two. Whilst I had a lot of good feedback about the quality of the prose, it became increasingly likely I would never sell them. So I parked them for a while - usually waiting to hear from some publisher or another - but never really wanted to abandon them.

You see, I have a great affection for Mordent. He can be bullish, immoral, misogynistic, but also funny, intelligent, and astute. I liked his sexual exploits as much as I liked the crimes he was embroiled within. He's fallible, for sure, anachronistic, fighting against the tide. He longs for the days when dames were dames and noir was in its heyday. Yet he also realises those days never existed outside of celluloid, remaining content to live his life as though they did. So I decided to re-read the books and see how I felt about them. I realised that I very much wanted to see them in print even if only a dozen people read them. I decided to go it alone.

In re-editing the first two books I made a couple of 'author's preferred edition' notes. Because "The Immortalists" (and to some extent "Church of Wire"), had been built on those previously written short stories, they had been included as background material woven within the novels. In writing those longer works, the short stories had given me a leg up, but in hindsight I saw they dragged the plots down. So I pulled those stories from the novels, and together with other Mordent stories I've written since, decided to create another book. "Dead Time" is a one hundred and fifty page collection of Mordent stories which sits well alongside the novels in its own right. I also had been convinced by Telos to have a prologue in "Church of Wire" as a teaser for the novel, an action scene that was pulled from the middle of the book. In this Head Shot edition, I've restored it and removed the prologue. I was never totally happy with the decision - although respected the business sense of it - and when one reviewer had picked up that they thought the prologue unnecessary I found I was inclined to agree with them. Those two novels have therefore been edited for these editions. 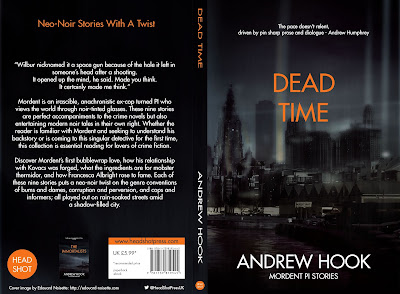 In rebranding the novels I decided not to simply go the Amazon route for self-published paperbacks, but having already run an award-winning publishing company (Elastic Press, from 2002 to 2009), I knew I wanted to also publish other writers, in particular, Andrew Humphrey, whose crime writing I have always admired and whose two short story collections I had published with Elastic Press. I knew I could work with him on some longer works that he had squirreled away. So the game was afoot.

Even so, it was a couple of years with the idea at the back of my mind before I decided to run with it in 2021. I had the name of the press, Head Shot, for a while, and liked it. I wanted the books to look as 'crime' as possible, so anyone scanning the covers would assume the content. But finding artwork for five titles which might clearly identify them as a series and which had some kind of unity of theme wasn't obvious. After abandoning a few ideas, I had the thought of using one piece of artwork which might work as the cover for all the books. Artwork which - if the titles were laid side by side - would create one picture. Bearing in mind the 'noir' and 'city' theme it was a quick google search to find an appropriate cover. An excellent piece of art that was the composite of several cities and so not tied to an obvious location, which dripped with noir. Contacting the artist, Edouard Noisette, we negotiated terms and the piece was obtained. 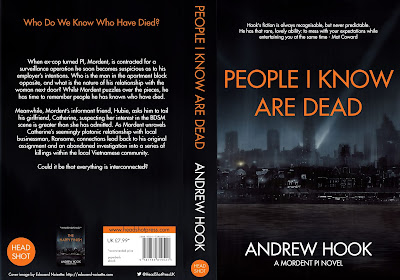 I paid particular attention to fonts and colours. In my Sunday library job a lot of crime books pass through my hands and I got a feel for how they should be presented. I selected a font by scanning covers into a program which could determine which fonts were being used, and I selected the colours by also watching trends with recent titles. The back covers for the print options were also suggested by templates from a variety of publishers. The logo is simple, basic. I think the cover captures the feel of the book without over-explanation, something that I've been guilty of in the past when offering artwork ideas. Even if the stories are different from the norm in crime, I wanted them to look the same.

In the end, I've produced five books which I'm exceptionally proud of, which I think could sit on a shelf and be identified as crime, and hopefully will catch the eye with a reader. Maybe even with two readers. Truth be told, these might not sell and I might have spent much of this year riding a white elephant. But I'm glad I chose this option and I'm happy the books are now out there. I'm now looking forward to reading what other work might be sent my way (from writers who read the guidelines first). 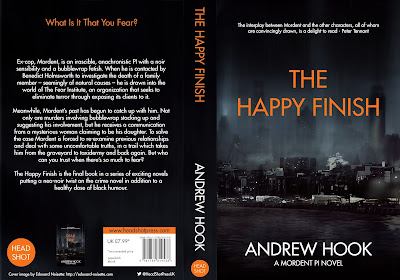 All books are available through links on the Head Shot website. Alternatively, a quicker route to the Kindle versions can be found here