My short story - co-written with Eugen Bacon - titled "Messier 94" will shortly be published in her collection, Danged Black Thing, and whilst I usually write a few words discussing how a piece came to be written it seemed to make sense to suggest to Eugen that she guest writes this post. The book is available for pre-orders now.

Before I introduce her, however, it's worth mentioning that Eugen 'discovered' my writing through my collection, "Frequencies of Existence" (NewCon Press) which she had been sent to review. Her reaction from that book was that she asked if I could write a blurb for her short novel, "Ivory's Story", also being published by NewCon Press. Although I agreed, initially I was wary of entering into a potential back-scratching situation, however after having read "Ivory's Story" not only did I want to write a blurb, but a full review which I then placed in Black Static magazine. At the conclusion of that review I wrote that the novel was "a fast-paced organic fantasy shone through a poet’s timbre and I loved it." From this, her suggestion that we collaborate felt like an exciting prospect. 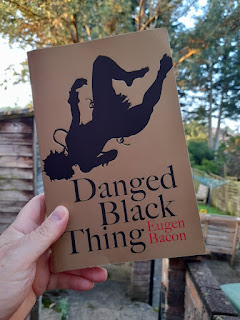 I’d finished reading Andrew Hook’s short stories in Frequencies of Existence, Human Maps, The Forest of Dead Children and The Alsiso Project, and was hooked.

I was also fresh off collaborating on a short story with Seb Doubinsky, and had previously written with E. Don Harpe and Dominique Hecq, so writing with others was not a novel thing for me to do. And I was already nuts about Hook’s way of saying, how his mind takes him.

‘A collaboration sounds like fun and something I’d definitely be interested in,’ he surprised me with his response. ‘Do you have any specific ideas?’

‘When I’ve done it before,’ he said, ‘it was a case of taking turns with the other writer, adding 500-750 words or so and then sending it back and forth until the story was finished.’

‘Looking forward to seeing the start of the collaboration,’ he said, leaving me in a mixture of trepidation and ecstasy. What the hell were we going to write?

I opened a folder named ‘working with Andrew Hook’.

By Andrew Hook and Eugen Bacon

I was passing through an altered line-up of suspects removed from linear time, but none revealed their wind or percussion, not even a state of mind. What I needed was a shift that happened inside out, outside in, something fixated on call and response. What I needed was a zoom, possibly in never out… 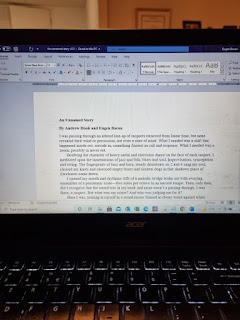 I wrote 908 words, to be exact, including a header that stated:

The excerpt finished with:

I caught a whiff of cinnamon, muffins freshly baked. Something burnt and nutty: coffee perhaps.

“Will that be all?” piped a voice.

I sank on the bed, too miserable to tip the child—the child!—perhaps a teenager, wearing curls on his head, a tux and a bowtie and the big eyes of an adorable puppy. I put my head in my hands, stared at my feet as the door softly closed.

The blood on the door and the carpet was gone.

Hook took a few days, perhaps a week, came back with a response—433 words. I loved how he’d picked up the story and connected with where he was going:

Dr X was an intriguing nom de plume, an inescapable lie. Regardless of a shifting perspective which nagged at my psyche, I had recollections – memories, education – which scrolled through my mind like a zealot through microfiche. Data, sensations, visions, dislocations formed information I knew and moments I had lived. In addition, those strong breakfast smells suggested baseline reality. Whilst forcing a construct upon my malleable environment, I found I could operate within different parameters. I watched my fingers mutate in the process of extending, reaching for a muffin which changed shape before my eyes. My conclusion defaulted to virtual reality, yet when the muffin reached my mouth there was no sensation of falsehood. The texture was as authentic as the taste. Perhaps it was more likely any hallucinations were narcotic in nature, as opposed to an exterior simulation.

My keenness soared. Especially when I read this part where Hook wrote:

I was reminded of a galaxy, Messier 94, itself an anomaly within others of its kind. Unlike regular spiral galaxies which were a disk of gas and young stars, intersecting a large sphere of older stars, Messier 94 did not contain such older stars. Instead a bright central structure held intense star formations which resembled a bulge forming a ring around the central oval region.

So I named the next draft of ‘An Unamed Story’ to ‘Messier 94’, and sent Hook the next iteration. He replied with more words. And thus it was, back and forth, back, forth. What struck me about Hook is how he sent back polished drafts. His email would be something like: '...been busy... found a minute... hope you like it...' And it would be a perfect write. Where I fiddled and fuddled, moved things around, edited, edited... Hook took a minute on his computer, quickly read through the story so far, and then punched something polished straight from his head.

Sometimes the story appeared to spiral, and I worried we might be unable to contain it. But it always aligned itself. Finally, I sent Hook what I thought might lead to a neat closing.

He replied in a few days. ‘Here’s our collaboration. Added 774 words,’ he said. ‘Worked it back around (I hope). Feel free to conclude.’

Finally, we had a story, 5,300 words of slipstream fiction that made perfect sense, and didn’t. It was awesome. 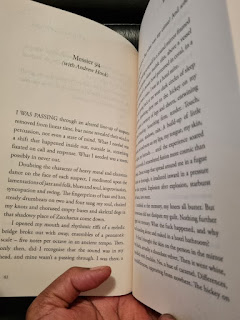 ‘Messier 94’ is the eighth story in Danged Black Thing, out in November 2021 by Transit Lounge Publishing and available now for pre-order. I am excited to hear what critiques think about this particular story—already they’re talking good things about the collection that also features stories with Seb Doubinsky and E. Don Harpe—all collaborators in a potentially unclassifiable single-author/multi-author collection/anthology that should be a publisher’s nightmare, but so far isn’t!