My short story titled "The Redeemers" has just been published in the anthology Ars Gratia Sanguis, edited by Steve J Shaw, and as usual I'm writing a few words discussing how the story came to be written. There may be spoilers within.

I was invited to submit to this anthology where the theme was for horror stories to be based upon a work of art - either real, or imagined. Initially I considered a piece of performance art, possibly by Marina Abramović, but then I gravitated towards a piece which I'd seen at the Liverpool Tate Modern quite some time ago, but which had always resonated with me. That piece was "The Redeemers", created by the artist John Davies. 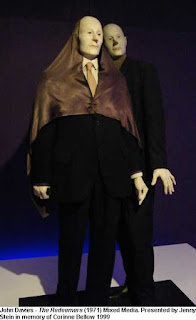 As you can see from the above, there's an interesting dynamic happening here. The covering on the male's head is disconcerting and somewhat sinister. I also like how the figures lean into one another, as though conferring. I wasn't quite sure how I was going to approach my story, but I had a starting point; and whilst I generally use my own titles for fiction, I felt the original title would also suit my story.

Considering the artist was still alive - and whilst perhaps unlikely to read my story - I wanted to reach out to check he was happy for me to use it as a springboard, but also to discover if there was any particular meaning I should know about. I received an enthusiastic reply from John Davies which I'm sure he won't mind me including here: "I have always been reluctant to explain my work as I have confidence in the onlooker to be creative, as we all are in our imagination. I liked the mystery of creating an enigma for people to puzzle over, like witnessing something on the street and not being able to stop and interview the people." Wholeheartedly agreeing with this, and having John also giving me the go ahead, I began to think how I could incorporate the piece in the story.

Deciding that I didn't want to impose meaning on someone else's art, even with their permission, I decided to have the artwork as a catalyst for my main character. I had read about Stendhal syndrome, a psychosomatic condition where a person might experience rapid heartbeats, fainting, confusion and even hallucinations, allegedly after being exposed to artworks. Suddenly I had the basis for a story, whereby my main character becomes obsessed with recreating the feeling he first gets upon seeing The Redeemers. Becoming subsequently banned from the gallery, he seeks other ways to satisfy this obsession... 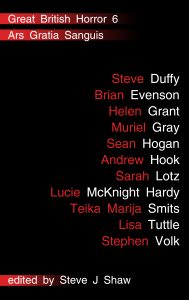 Having written the piece, I emailed it over to John Davies for his opinion. I don't know what he was expecting, but I was happy with his reply: "I've read your story, and may not sleep tonight! Quite a riff on my 'Redeemers' and you have certainly let rip with YOUR creativity. Naturally, it's uncomfortable for me to read; imagining if they were affecting a real person in this way would be quite a responsibility -- so I am trusting it's all a fiction that your readers will enjoy!"

Incidentally, I always write stories with music on a loop in the background. In this case, it was the album "Felt Mountain" by Goldfrapp.

Here's an extract: From that instance in his bedroom, it subsequently proved impossible for Bates to not see the redeemers. At the supermarket, in the benefits office, in public toilets, on the street, in field, forest and sky. Their presence was everywhere: enigmatic and enduring. Even when Bates closed his eyes he found their image burned onto the back of his lids. Always unmoving, always perfectly rendered, always real. Through repetition, however, his reaction had numbed: the greater the interaction, the less of an impact. He could barely hide the comparison to other relationships, where initial mystery and expectation becomes relegated to routine and conformity. The inexplicable reaction he had first experienced at Tate Liverpool was now a dim memory, as faded as his first job, his first house, his first love. 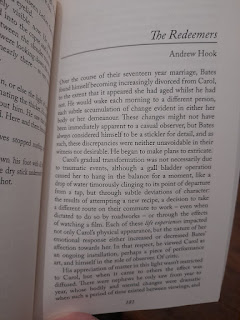