My short story titled "Caboose" has just been published in the anthology Railroad Tales, edited by Trevor Denyer, and as usual I'm writing a few words discussing how the story came to be written. There may be spoilers within.

The call for submissions for this anthology requested stories that involved the supernatural in connection with railroads, railways, or any aspect of rail travel or location. Furthermore that the stories should be set at any point in the past and be historically accurate where appropriate. I had previously written a more modern train story for a similarly-themed train anthology, "Rustblind and Silverbright", published by Eibonvale Press, but unlike that story this was more of a challenge. I don't write historical pieces. Where should I start?

I began by thinking of a recent album by The Residents, "The Ghost of Hope", which was a themed record of historical train wrecks. The Residents had been influenced by a book titled "Death by Train: Horrifying yet True Stories of Train Wrecks and Accidents 1879-1927", which I found on Kindle through Amazon. A compilation of old newspaper reports from The Bradford Era of train crashes, this was to provide excellent research. What struck me was the language used in the reports: visceral and unflinching. We think our tabloids are insensitive nowadays but nothing with this type of purple prose would pass muster today. Whilst reading I was struck by the word "Caboose", which echoed with me as a title. One article in particular stood out. Headed "A Shroud of Flame", it detailed an unfortunate incident where oil spilled onto tracks ignited, engulfing the engine and carriages and causing numerous burns and the horrific deaths of three female passengers as the unstoppable burning train tore through a snowy landscape. The piece was almost cinematic in its intensity, and I knew I wanted to write that story.

However, the train in question had no caboose! I toyed with another title, "Oil City", which was the final destination of one of the female bodies, but it didn't resonate with me. For a while I was stuck on how to proceed, until I realised that it was the very fact that there was no caboose in that train wreck that my story had to be called Caboose. This tied in directly with the haunting.

Initially my thought was to set the story historically when the incident occurred with the intention to emulate the prose of the newspaper reports, however I realised that style wasn't my style, and I needed to set the piece in the present day with reference to the past. Concerning the supernatural element, I wanted this threaded between the main story, with the perspective changing sometimes mid-sentence, as though past and present were overlayed. If ghosts exist, I see them more as appearing in parallel realms which only briefly coincide with ours, so taking one of the females from the original train crash I threaded her experience within my story.

I always write with music on a background loop and considered something from "Ghost Of Hope" (in fact, I didn't realise til afterwards that this included a song based on the same incident), but the music was narrative-heavy and I knew it would impinge on my writing. So I considered two train songs, "Long Dead Train" by Hugh Cornwell, and "Ghost Train" by The Stranglers - who Hugh was once part of, of course. Ideally - and it excited me that the songs were almost the exact same length - I wanted to play both simultaneously, to echo the supernatural past/present vibe I wanted to capture in the story, but this proved technically difficult, so I instead chose the more rhythmic "Ghost Train" which during the writing of this piece I played 84 times on repeat. 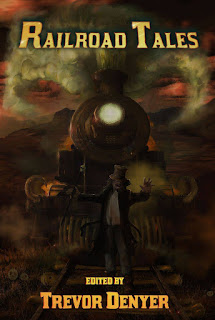 Here's an extract: She intended to keep the caboose decorated as authentically as possible to retain its character, using as much of the existing structure as she could. Whilst moving the caboose had seemed to dislodge a hundred years of dirt which had become embedded between those wooden boards and now coated the floor like ash, Molly soon swept this into a pile and then with vigorous brushstrokes jettisoned it out through the back porch where for a moment it seemed to coalesce into a definable shape before falling to the ground below. 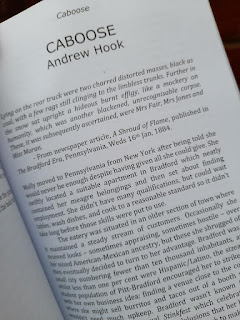