My short story titled "Mobster Thermidor" has just been published in the anthology, Crimeucopia: As In Funny Ha-Ha, Or Just Peculiar, from Murderous Ink Press, and as usual I'm writing a few words discussing how the piece came to be written. There may be spoilers within.

Over the years I've written numerous short stories and novels featuring an irascible PI named Mordent, who (although contemporary) sees the world through noir-tinted glasses and has (amongst other things) a bubblewrap fetish. I don't write a lot of crime, but I tend to default to Mordent when I do, and when the title "Mobster Thermidor" popped into my head it was a gift. Clearly a Mordent story, the play on words with lobster thermidor created a pathway for a piece which almost wrote itself.

There's not much more to be said about the gestation of this piece. Mordent gets sidetracked into a relationship with a woman with mob connections and begins the story sinking into Lake Michigan whilst wearing a concrete overcoat. As usual, conventions of noir dialogue allow an abundance of wordplay, much of it comic, hence Murderous Ink deciding to include the piece in this anthology of humorous crime stories. Mordent's way back from that restrictive garment being the thrust that propels the story. 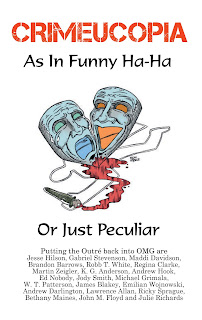 Here's an extract: Mordent’s kind of town held a bar and a girl. He found both at the same location. Not as might be expected at The Green Mill Lounge which had been Al Capone’s favourite haunt, nor at Marge’s where bathtub gin used to be served in the cellar, nor fellow-speakeasy Twin Anchors where - renamed Tante Lee Soft Drinks during Prohibition - it sold alcohol alongside a secret basement escape hatch. Instead Mordent favoured The Red Lion Pub on North Lincoln Avenue where – in an alley across the street - gangster and bank robber Johnny Dillinger had been gunned down in 1934. Souvenir hunters had dipped newspapers and their skirts in the blood that stained the pavement. If Mordent kept his gaze askance he might almost imagine Dillinger crossing the street from the old Biograph Theater, having watched the gangster movie Manhattan Melodrama. Instead he should have kept his gaze away from Marcia, who entered stage right and sat on his left, resting her hands and then her head on the dark oak-planked bar.
“I’m beat.”
“Maybe you should be.” Mordent was a cack-hand at one-liners.

I usually listen to music when writing a short story, and in this instance I wrote whilst playing the album "Lust Lust Lust" by The Raveonettes on repeat. 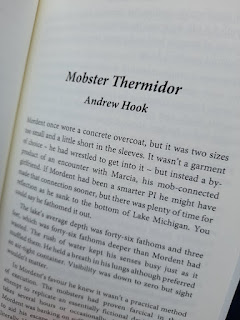