The Forest of Dead Children

My new book - a micro-collection of five themed short stories titled "The Forest of Dead Children" - has now been published by Black Shuck Books. Here's some background into these stories and how they developed into the book.

Whilst I'd been aware of Black Shuck Books for sometime - particularly their Great British Horror series - I hadn't seen their Shadows imprint until the Edge-Lit event in Derby in July 2018. I was immediately struck by the slim format and excellent covers and struck up a conversation with publisher Steve Shaw as to whether they were taking submissions. It was at this point that I discovered the collections were loosely themed, and without a theme in mind I decided to leave it there.

However, conventions are always great places to fan creative flames and it wasn't long before I was back home and wondering if I had something or could write something which might fit a theme. I had recently written a story titled "The Harvest" about a man whose child dies when left in a hot car: but the original title of the piece was "The Forest of Dead Children". I'd changed the title - something I rarely do - because the resulting story didn't quite match it; but I had been planning on using the title again. Suddenly, the theme of dead children became apparent. I realised I had two other pieces already written which would work with the theme, and "The Forest of Dead Children" seemed perfect as an overarching title for the collection. Not only that, the previous evening cycling home I had been behind another cyclist with a young child on the back of their bike. Their child was asleep, head lolling from side to side, and it crossed my mind they might be dead (I'm a barrel of laughs, me). This idea tied in with a story title I was intending to use, called "The Rhythm of Beauty". The collection was taking shape.

I knew Steve was looking for a minimum of 20,000 words and I tend to write short pieces. This meant I would need to write one story which would be much longer and form the basis for the collection to hang upon. Having a title story seemed the best option, but I wanted something quirkier than that. For a while I'd had an idea about children whose lives are extinguished through being forced to be suicide bombers, or via child sacrifice or other rituals and how these stories almost always have a non-Western setting. I wanted to challenge that perception and place them in settings both familiar to Western readers but incongruous with perceived stereotypes. I felt the title would encompass this, with a tweak: "The ______ of ____ ________". Ideal for missing children. Approaching Steve, he was happy to take a look and subsequently happy to publish it. 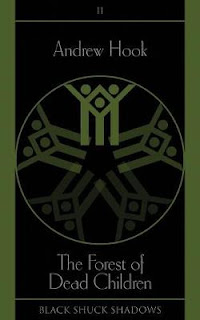 So the stories in this collection are as follows:

"Shipwrecked In The Heart Of The City" (previously published in the anthology "Night Light" from Midnight Street Press and previously blogged about here).

There was nothing for it. He took off his clothes, pulled the sheets from the bed until all that remained was the bare wooden frame. He curled up, foetus-like, his head bent in supplication, his knees close to his chest, his arms tight, little fists tensed as if expecting to box. After a moment he felt for his umbilical cord where it was squashed between one leg and his stomach, and he straightened it, pointed it away from his body, as though it were an arrow to another place.

"The Rhythm of Beauty": Frisch attempts to determine the source of his daughter's night terrors whilst battling his own resulting lack of sleep.

They fell silent within their room, whilst the tumult continued on the other side of the wall, Esme battling what appeared to be a physical demon, incoherent drama forcing itself from her mouth, snatches of words amidst a gale of noise. Frisch felt guilty, waiting for the act to subside was a paradigm of boredom.

"My Tormentors": A Kafkaesque allegory where a mother's attempts to reach a hypothetical castle are subverted by her two young assistants.

At her lowest, the assistants are an antumbra, darkly leaching her personality as though she had ever given it away for free. Morning light gradually picks off the mist as though busting ghosts, sucking dampness dry in the fluid-sperm-wriggle manner of vacuuming ectoplasm.

Amanda made the first small cut on the roof of Loren's mouth with a scalpel so sharp Loren didn't register any pain and only realised the procedure had been concluded when she tasted copper in her mouth.

"The Harvest": A father spends some quality time at the beach with his daughter on an exceptionally hot day following which she succumbs to sunstroke and passes away amidst surrealistic reverie. 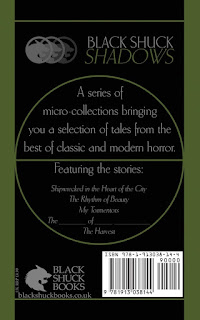 So why the plethora of stories about dead children? Having had two children I'm more than aware of the responsibility I have towards their mortality but am also painfully aware of how difficult it can be to cope. Children are such a drain on time and resources with varying degrees of emotional payback, it's no wonder we fantasise as to how life might have been without them.

"The Forest of Dead Children" is available through Black Shuck Books.
Posted by Andrew Hook at 10:18