My ten thousand word short story, "The Uneasy", has been just published by Eibonvale Press as a standalone chapbook so as usual I'm blogging a few thoughts as to how the piece came to be written.

"The Uneasy" originated from a discussion between myself and my partner - the poet, Sophie Essex - as to whether we should write a collaborative piece whereby our two styles were conjoined to make a third voice. My writing tends towards story whereas hers is more abstract. I suggested we write the same story: with my version forming a book which could then be flipped over to read her more surreal interpretation. For various reasons, this didn't progress, but the germ of the idea was there: to write a sexual discovery story through surrealistic techniques as a counterpart to books such as the Fifty Shades series. I don't remember where the title came from, but it seemed to fit.

Another jumping off point was Louis Aragon's surrealist novel "Paris Peasant" which I had recently read. For numerous reasons it made sense to set the story there, and I wanted a distant, almost mechanical style to the writing which might echo the Aragon as well as trip through Paris. 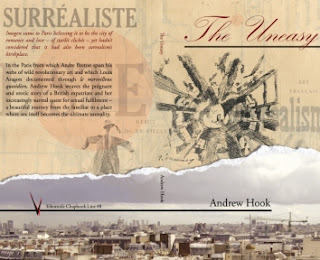 The men wore plague masks of the bird beak fashion, together with drab ankle-length grey coats, boots, gloves, and wide-brimmed hats. She could smell lavender from crushed flowers pressed into the nose cone. They pirouetted around the bed, with each turn worn fingers unbuttoned their garments, until all that was left were the masks and their penises swirled like guy ropes in a sea breeze and they spun faster becoming smaller before they winked out of existence.

I should point out that there are traces of Sophie's writing in the book. Those are the best bits. And by coincidence Eibonvale have just published her first poetry collection. 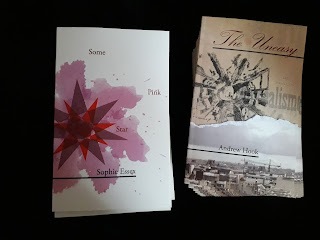 "The Uneasy" is available from Eibonvale Press, here.