Well, it's that time of the year when everyone is doing their 'best and worst of' lists, so here is mine. I'm going to list the books and movies I read/watched in 2018 and then pick my favourites. This isn't restricted to what was new in 2018, but what I actually watched and read - some of these items might be very old indeed.

That's worked out at 43 books this year, up from last year's 37 although my target is probably 50 (which would take me 7 years to get through my backlog without buying any more books). There were a couple of books this year that I struggled through and which I should probably have given up on, which included the Icelandic novel "The Creator" (unremittingly bland) and "334" by Thomas M Disch (a scattershot rendering of disengaging prose). There were also a handful of novels by authors I usually like which disappointed: Nicholas Royle's "Regicide" (a book of two halves, which I would have preferred to remain in the first half), Chris Kelso's "Unger House Radicals (much acclaimed, but it didn't quite engage with me), and Jim Thompson's "The Transgressors" (a floaty chore). An author new to me, Ernest Hemingway, also totally disappointed with "Fiesta: The Sun Also Rises" (Not sure why, the prose is so simple as to be a Janet and John primer, and the plot only subliminally exists so there wasn't anything difficult to follow).

I rarely re-read books, but this year I revisited Tom Robbins' "Jitterbug Perfume" which – it turns out – remains one of my favourite books of all time.

As usual, I'm going to base my top three from my Goodreads reviews. Four books received my 5/5 rating, but I'm not including Mark E Smith's "Renegade" as I prefer my final three to be fiction. So, without further ado, here they are:

"The Doll's Alphabet" by Camilla Grudova 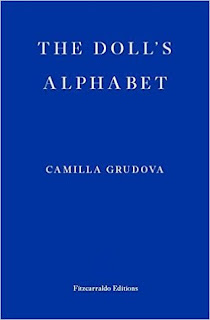 This collection of 'weird' short fiction feels very natural and not forced, as though Grudova is simply writing about the world as she sees it rather than imposing any weirdness upon it. and whilst initially I struggled with wondering what the 'point' of these stories was, eventually I realised that it didn't matter, that – to use a cliché, not that Grudova would – it was the journey rather than the destination which was important. A brilliant skilled prose writer, Grudova's world is a palace for readers and writers alike. 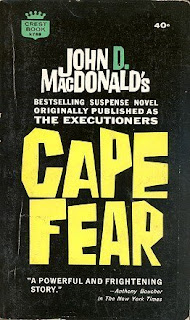 This crime novel is a terrific book, faultlessly relentlessly terrific. Tension is sustained throughout the 200 pages: gripping, haunting, formidable, relatable. Dialogue between the Sam Bowden and Cady, his nemesis, is electrically charged, but – a real strength – the dialogue and easy camaraderie between Sam and his wife is also beautifully realised, so the book is a love story and no less realistic and honest for that. The ending is perfect, returning the glaze of normality over a fractured world. 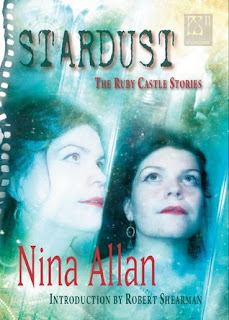 You really can't fault Allan's writing, and in this collection of very loosely linked short stories she excels, the tales richly layered and dense with portent. Characters are immaculately defined and engaging, and the stories themselves are perfectly formed. This is exactly the type of fiction which appeals to me: stories grounded in a world apparently recognisable as our own, which subtly tilts to subvert our expectations, leaving characters breathless in a new scenario where the ramifications affect them deeply. These are stories which resonate with the human condition yet are also recognisably weird. I cannot recommend Nina Allan highly enough. Amongst many strong contenders this year, this is easily the best book I read in 2018.

Spotlight On A Murderer
The Wildest Dream
Meru
Everest
The Summit
That Obscure Object of Desire
Kinetta
Umberto D
Mallrats
The Anderson Tapes
Jumanji
A Serious Man
The Crimson Kimono
Dyketastic
Reprise
Being John Malkovich
Rey
Mountain
Man Bites Dog
Dead Slow Ahead
The Structure of Crystals
The Lost Weekend
An Education
Los Decentes
L’Amant d’un Jour
Birdy
Arrival
Train to Busan
Six Shooter
The Challenge
Mindhorn
Pontypool
Dr Strangelove, Or How I Leant To Stop Worrying And Love The Bomb
The Red Turtle
Silence
The Florida Project
Thelma
The Handmaiden
Dogville
The 400 Blows
Louder Than Bombs
Suburbicon
Wùlu
Seven Psychopaths
Morvern Callar
Annihilation
Goosebumps
The Neon Demon
Under The Shadow
Green Room
Meshes of the Afternoon
Bottle Rocket
Isle of Dogs
Canyon Passage
Valerian and the City of a Thousand Planets
Elle
I Feel Pretty
Café de Flores
A Touch of Evil
Written On The Wind
Husbands and Wives
The Fall
Stand By Me
The Squid and the Whale
The Awful Truth
Closer
The Tarnished Angels
The Heart Is Deceitful Above All Things
The Glass Key
Rumble Fish
Les Deux Amis
The Blob
Trouble Every Day
The Homesman
The Killing of a Sacred Deer
Harry Smith at the Breslin Hotel
A Branch of a Pine is Tied Up
Polytechnique
Un été brûlant
Mud
The Autopsy of Jane Doe
Europa
A Ghost Story
The Canyons
The Rise And Fall Of A Small Film Company
Cape Fear
Wind River
My Man Godfrey
Meteors
Capote
Machete
Twelve Monkeys
Some Like It Hot
Sullivan’s Travels
The Lady Eve
I Am The Pretty Thing That Lives In The House
White Chicks
Cry-Baby
Rope
Happy End
8½
The Man Who Knew Too Much
Avalon
Les Garçons Sauvages
No Man Of Her Own
Frenzy
Taste Of Fear
Nocturnal Animals
In The House
Have A Nice Day
Crimes of Passion
The Theory of Obscurity
The Wolf House
The Curse of Frankenstein
The Ballad of Buster Scruggs
The Wanderers
Touch Me Not
9 Fingers
The Man Who Fell To Earth
In The Shadow Of Women
Bird Box


That's 121 movies this year, a rise from the 99 of last year which is good news. Of course, that's a long list to narrow down to my top three, and unlike books I don't have a site equivalent to Goodreads with which to guide my memory.

As usual, however, I'm discounting movies I've previously seen. So this knocks out Buñuel's wonderful "That Obscure Object Of Desire", the better-the-second-time-around "Being John Malkovich", Kubrick's delightful farce "Dr Strangelove", Truffaut's (dare I say it: 'a bit boring on third watch') "The 400 Blows", the sublime "Some Like It Hot", the Oh-That-Ending "The Man Who Knew Too Much" (Doris Day version), and the intriguing "The Man Who Fell To Earth."

Those movies which I found annoying or awful are easy to chronicle, and this includes "An Education" which I absolutely hated and found morally repugnant, "Seven Psychopaths" (an absolute overblown mess), "Wind River" (much acclaimed for no apparent reason), and Hitchcock's "Frenzy" which really felt as though it was a homage to the great director from someone much less skilled.

This leaves us with some great movies. My favourite discovery this year has been Norwegian director Joachim Trier. Whilst I saw and enjoyed "Oslo, August 31st" another year, this film pales against a trio of films watched this year: "Reprise" (brilliant study of two men dreaming of becoming successful writers), "Thelma" (an intriguing supernatural fantasy drama, which loses it a little bit towards the end but which remains powerful), and ... actually, the third film will be amongst my top three so I'll leave that for a moment. Other favourites include "Arrival" (SF first contact story with an intelligent heart), "Train To Busan" (the first zombie movie to make me cry), "Dogville" (a masterpiece of experimental film by Lars Von Trier, "The Florida Project" (a trailer-trash film with a solid heart which has lingered in my mind for several months), the joyously insane "Valerian and the City of a Thousand Planets" from the ever-inventive Luc Besson, Orson Welles' "A Touch Of Evil" (what an opening sequence!), Francis Ford Coppola's skewiff coming-of-age film, "Rumble Fish", Von Trier again with "Europa" (which we initially began watching – in error – for twenty minutes – without subtitles believing the dichotomy to be part of the film), the poorly named but brilliantly realised "Trouble Every Day" (by Claire Denis), "A Ghost Story" (which might have made my top three if I hadn't completely misunderstood the repeated 'wallpaper' sequence), "Capote" (for Philip Seymour Hoffman's commanding presence alone), the totally nuts full-out enjoyable "Machete", the detailed biography "The Theory of Obscurity" about avant-garde band The Residents, and "9 Fingers" (kind of existential French noir, confusing and dreamlike).

As usual, I get the feeling that another day might produce marginally different results, but – today – here are my top three movies I saw for the first time in 2018.
Again, in reverse order: 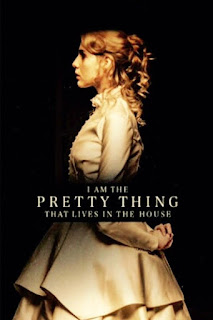 There's a real quiet charm to this ghost story which elevates the film way beyond similar fare. Constantly wrong-stepping the audience – but in a logical, un-horror-like way – the end result is fascination rather than dread, with a beautifully understated performance from lead actor Ruth Wilson. For those attuned to the standard 'jump scenes' these are thankfully few and far between, with the denouement perfectly rendering how the effect of actual sudden fear might result. It's quirky, winsome, and intriguing. I loved it. 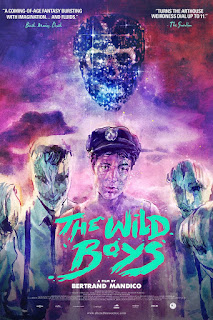 This beautifully beguiling bizarre film is better watched without knowing anything about it. It's an exceptionally inventive piece of work from start to finish and – to me – represents all that cinema should be about. I can't recommend it highly enough: such a welter of imagery. It misses out by a hair's breath on being my favourite film seen this year. I want to enthuse more but spoilers would result. See it. At any cost, see it. 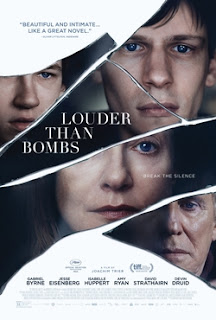 So as previously mentioned, director Joachim Trier was (almost) a new discovery for me this year, and certainly this movie is my favourite of his and easily the best film watched in 2018. The central family performances from Jesse Eisenberg, Gabriel Byrne, Isabelle Huppert and Devin Druid are exemplarily. As the film ended I turned to my partner to dissect what we had watched as usual and I – literally – couldn't get any words out. I was totally overcome with emotion. And this wasn't a response to some glib sentimentality designed to push certain buttons, but more of a psychological reaction to breathtaking honesty in filmmaking, of how the right kind of art can do the right kind of things, of how even the best relationships are two-dimensional, and about how everything is potential and no more nor less than that. Trier unfolds this simply: allowing us to watch and absorb without judgement. There's no condescension to the audience, so when the film ends you are left bereft and replete simultaneously. And that's without me needing to detail the plot. Astonishing!

So that's it. Looking forward to reading and watching more in 2019!
Posted by Andrew Hook at 16:44