The first Disco DADA night was held on Wednesday 12th December 2018 in Norwich in an upstairs room at the Sir Garnet pub. My partner - Sophie - who runs a regular poetry night in Norwich (Volta) -  and who is also on the committee for CafeWriters - had intended to run a DADA night for some time, but there was always a question of whether Norwich was ready for it and also how she should go about planning it. Eventually, this small room (capacity 30) was offered by our regular Volta hosts and she decided we could make use of it for this purpose. What could go wrong?

I knew I wanted to pay tribute to The Residents, the avant-garde San Francisco band who certainly in their early days - and probably currently - were obvious inheritors of DADA (whether intentioned or otherwise). So I spent a few weeks fashioning a papier-mâché eyeball head with the intention of reading out some song lyrics - together with some audience participation. I also viewed this as a homage to the recently late Hardy Fox and his contributions to the anonymous band. Considering I'm not in anyway practical, I was pleased with the eyeball. Sophie sought poetry/illustration contributions to pin up on the wall, sourced a mic and amp, bought groan tubes, disco lights, and dug out a raygun, in addition to writing some cut-up for the night. All set.

As the audience arrived we rotated a couple of tracks from The Residents "Tale of Two Cities" album, played via a mobile phone into the mic. Mostly this one:


The evening was opened by poet Cai Draper - wearing something resembling a monk's garb - brilliantly setting the scene for what we hoped would come. Each reader 'introduced' by Sophie displaying their name in children's magnetic letters on an oven tray (and of course, Sophie was wearing her latex armadillo mask). First up was much-published poet, Peter Pegnall, who on this occasion confirmed that Peter was no more and that his poetry was currently being channelled through a soft-toy pig found on a North Norfolk pig farm. The pig alternating between poetry personal and political, as pigs are wont to do. 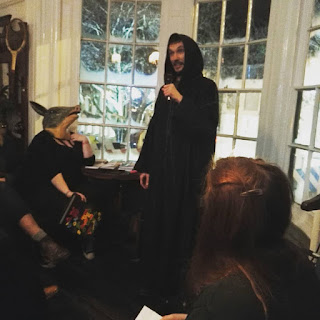 After a couple of more regular readings from poets Iona May and Adam Warne, Sophie read a cut-up poem juxtaposing text from DD/lg erotica and the Conservative Party Manifesto (which I have suggested she titled The Fever Dream of Rees-Mogg), which was perfectly mashed and well-received. The final line being particularly evocative: I want Britain to finger-fuck me again. This was followed by a reading from Anna Cathenka (whose book, they are really molluscs, we had decided to launch at the event). Beginning with an increasingly loud audience chant - DADA means nothing - she read some pieces from the chapbook and another recent publication.

So far, so good. I wore the eyeball throughout the first half, determined to continue doing so even if I collapsed (or, as Peter helpfully suggested, died). We took a short break, giving the following festive song a spin:


Back on: Cai opened the second half with 'a poem not yet written', performing a made-it-up-as-he-went-along cut-up of Anna Cathenka's they are really molluscs, complete with invited interruptions from the groan tubes, thrown objects etc. I thought both his performances during the evening were spot-on excellent.

This was followed by local poet Alex Russell, reading poetry into jars as part of a preserving poetry project:


These poetry jars can be purchased here.

And then me. It wasn't easy to read through the mask, but I think this added to the performance. Partial lyrics were culled from the songs "Moisture", "Margaret Freeman" and "Troubled Man" from The Commercial Album, "Sinister Exaggerator" from Duck Stab, the festive single "Santa Dog", an excerpt from "The Making of a Soul" from Not Available, and part of "Walter Westinghouse" from Fingerprince - which involved audience participation of the lines "eat exuding oinks upon / and bleed decrepit broken bones / at caustic spells of hell" read from a chalkboard and shouted louder and louder until I felt fit to stop. But don't take my word for it, watch some of it here:


My performance was followed by Bristol poet, Sarah Cave, who amongst other pieces read an excellent DADA-ist Moomin poem dealing with Moomimpappa's grief at Moominmamma's death. 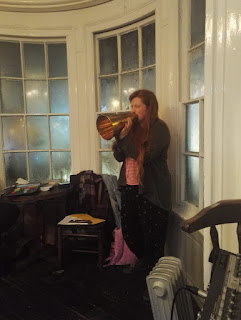 And this was followed by Norwich poet Alison Graham who performed brilliantly, bewigged and on her knees. 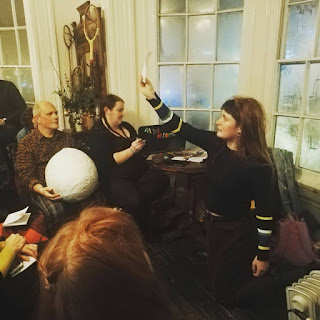 The stage was set for more nonsense. Local artist Jacob Beaney commandeered a table, chair, a male member of the audience following a request for a female, and Alison's wig. In what has already been referred to as SpamGate or the Spamcident, he proceeded to lovingly craft a sculptured head of man-in-a-wig using the contents of tins of spam and corned beef, together with bacon hair and a sausage for a tongue, whilst Julia Bear wet-shaved his head. For me, this was the highlight of the evening, feeling totally impromptu as Jacob had only decided to buy the items from Tesco whilst waiting for the event to start. It wasn't popular with everyone, which was - of course - even better.


Finally, Anna Cathenka read again from they are really molluscs to the accompaniment of the sound of further head shaving.


My overall impression was that the evening was a success, balancing nonsense with passion and passion with nonsense. And we definitely need to do it again. I already have an idea for a mask replete with a six foot long snout held up by crutches... 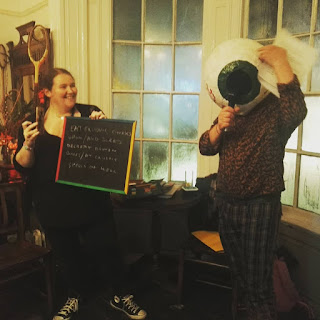