My short story, "White Matter", will shortly be published in the anthology, "Ghost Highways", from Midnight Street Press, and as usual I'm blogging about how the story came about for those who might be interested. Beware: there will be spoilers.

When editor Trevor Denyer announced the guidelines for this anthology in October 2015 I was immediately interested, not simply because it was a strong paying market, but because Trevor had previously published many of my stories - including showcasing myself in one of his earliest magazines, Roadworks, way back in July 1999 - and I knew I could have a good stab at it. Of course, there were no guarantees, but I was hopeful. The remit was simple, the story had to have something to do with the anthology title and be at least 5000 words in length. Interpretation would be down to the author.

Although I had no immediate ideas I knew from the start that my story would be unlikely to feature a ghost and probably unlikely to feature a highway. At least, not in the traditional sense. I began to think around the concepts of ghosts and what could be construed as highways. I was increasingly drawn to the idea of neural pathways, and searching online around these topics I discovered 'ghost tumours' - which appear to be normal cerebral tumours but can subsequently disappear - and also the role of white matter within the brain which - to put it very simply - forms the highways for information to be passed by grey matter. In Alzheimer's, white matter is frequently damaged. The deterioration of white matter into a ghosted highway would form the crux of my tale.

Around the same time I had been thinking about dementia and the circumstances where sufferers appear to live in the past - where short-term memory disappears and long-term memory comes to the fore. I decided to write a character whose first husband died early and who then married again, but who always hankered after the first husband despite being perfectly satisfied with the remainder of her life. What if she looked forward to the possibility of Alzheimer's as a way of connecting to the past, what if she had made preparations? How would her new husband feel about this? What are memories anyway, other than ghosts? Suddenly I had my story. 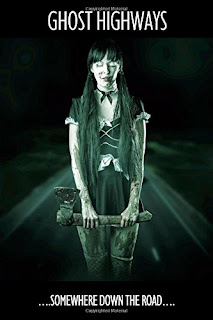 Everyone talks about grey matter, he remembered the doctor saying, as though grey matter is the be all and end all. Our little grey cells, he had said, tapping the side of his head, channelling Hercule Poirot, that's what everyone thinks about. But the cells and other components of the brain can be classified as either grey or white matter, and these perform different functions. Grey matter consists mostly of neurons and some supporting brain cells. White matter allows messages to be sent between brain cells much faster, protecting the parts which make those connections. So when white matter is damaged, it can affect brain function.

Marshall's eyes wandered between his left hand, which rested on Anna's right shoulder as she sat on a chair in front of him, and the doctor's mouth. Afterwards he could remember nothing of the doctor other than that mouth, topped by a white-flecked moustache, as though the moustache itself was an extension of the white matter damaged by the leakage from his wife's blood vessels.

Finally, I wrote this story whilst listening to the CD, "Ghosts" (a soundtrack to the novels of John Connelly, Volume IV) including songs by XTC, Sun Kil Moon, Susanna, and Mogwai amongst others, on repeat.