My short story, "Blanche", will shortly be published in the anthology, "Something Remains", from Alchemy Press, and as usual I'm blogging about how the story came about for those who might be interested. Beware: there will be spoilers.

Most of you reading this will be aware of Joel Lane, an excellent and wholly individual writer who amassed a great body of short stories, poetry, novellas, and novels before his early death at the age of fifty in 2013. Joel's death reverberated around the genre community, not only because of its suddenness, but also because of the great affection and respect he had gained within the scene - probably much more than he was aware of. I won't go into too much detail here (my blog post shortly after his death already covers this), but Joel strongly influenced my own writing and that of many others in the genre.

At FantasyCon 2015 Peter Coleborn of Alchemy Press announced an intriguing call for submissions. After Joel's death a large amount of unused material had been found - scraps of story notes, unfinished work etc. Peter had been approached by Joel's friend and fellow writer, Pauline Dungate, with a view to possibly using this material. From Pauline's introduction to the book: "My idea was somehow to resurrect the best of the ideas and ask some of Joel's friends to finish them." Peter had those notes with him at FantasyCon and invited those who might be interested to take a look.

I must admit my first thought was that this was something I wanted to take part in followed very quickly by reservations that it might be an unintentional ghoulish venture picking over scraps. Whatever the merit in the intention - and clearly neither Peter nor Pauline would have broached the anthology if they hadn't carefully considered it - would the result be somehow distasteful? I decided to look at Joel's notes purely out of curiosity, and it wasn't long before my reservations were overcome. Seeing Joel's handwriting made the proposal more personal. It would be a fitting tribute. Not only this, but it was clear that any writer taking part would be doing so for the same reason: to properly honour Joel's memory.

It wasn't long before I knew with absolute certainly which set of notes I wanted to work with. They show below: 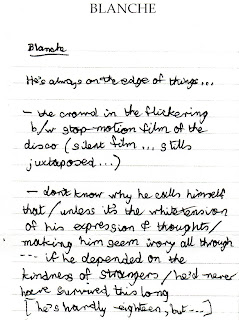 "Blanche" resonated with me. I had previously named a character Blanche Noir, and whilst I didn't subsequently re-use that name in the story my mind was already working. Some of the other notes were more detailed, but I was looking for a skeleton, for themes which I usually work with, for a sketch. "The crowd in the flickering b/w stop-motion film of the disco" immediately appealed, as did the reference to Blanche in "A Streetcar Named Desire", and the nature of identity (Blanche being a female name applied to a male protagonist). The seeds were there. The story had to be written.

I won't go into too much detail into how these elements infused my subsequent story, but there is plenty of Joel in the telling and whilst it's definitely my story it does fit the guidelines as I believe Peter Coleborn intended them: not as a homage or a pastiche but as a continuation. I hope Joel would have approved. 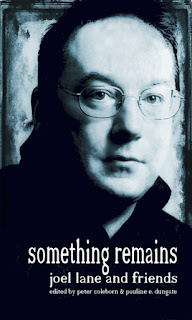 All profits go to Diabetes UK, a disease from which Joel suffered.

Finally, I wrote this story in one sitting listening to one song seventy times on repeat: "The City Never Sleeps At Night" by Nancy Sinatra. Give it a listen. At least once.
Posted by Andrew Hook at 13:38