My novella, "The Greens", has recently been published by Snowbooks and as usual I'm blogging about how the story developed for those who might be interested. Beware: there may be spoilers for those who haven't read it.

I believe "The Greens" has the longest gestation period of any of my fiction and some of the background has been lost in the mists of time. However there are three distinct story strands. The first is the twelfth century legend of the green children from Woolpit, Suffolk. The story goes that two young children - a boy and a girl - were discovered with green-coloured skin. They stated they came from underground, from St Martin's Land, which had it's own sun, and had become lost. Not long after their discovery the boy sickened and died, but the girl went on to marry a local landowner and her skin eventually lost its green tint. According to the legend, the girl bore no children. I remember hearing this legend and thinking: what if they did have children? What if there were descendants of the green girl living today?

Some time after this I watched a documentary regarding obsessive-compulsive behaviour. Previously I must admit I was a little ignorant as to the subject matter, other than that I knew sufferers might obsessively wash or needed to place items in specific orders. What I hadn't realised was that for some sufferers the need to do this was based on a genuine fear that harm would befall others - such as family members - if these rituals weren't adhered to. It was easy to understand how someone might feel trapped in this situation, because even if they understood the improbability there would still be the fear of ceasing the ritual. And then I wondered, what if this were true? What if the ritualistic behaviour of OCD sufferers actually was keeping evil at bay? And what if it turned out that all the descendants of the green girl suffered from OCD? What might they unconsciously be trying to contain?

The third strand was partially linked to the legend of the green children emerging from underground. I had long been interested in Hollow Earth theories. As a teenager I remember reading a book called "The Great UFO Breakthrough" which mentioned reports of an underground race called the Dero. These evil entities were 'detrimental robots' who originally appeared in a short story by Richard S Shaver in Amazing Stories, but who were subsequently believed to have a basis in truth. There's a fascinating article about them here. I had also subscribed to an email list for a company who were planning an - always aborted - trip to the Arctic to investigate Hollow Earth, and those emails provided me with useful information which I decided to work into the story.

So these were the three strands which became "The Greens". It was an ambitious book for me, as I usually work with more internalised dilemmas, and it took a while to structure it to my satisfaction. Without getting too technical I wrote the story from the perspectives of several different characters, but it was how I then ordered those accounts within the book which - I believe - became part of its strength. 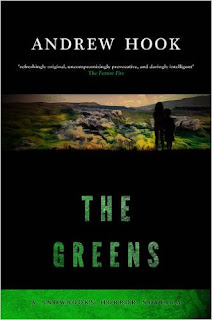 Finding a publisher was also a long process. The seeds of the ideas came from 2005, I wrote the book in 2009/2010, and many of the publishers I submitted to either took an age to respond or accepted but were then unable to proceed with it. I began to wonder if the book was jinxed, but on a whim I submitted to Snowbooks and had an acceptance within hours! All the years of turmoil had worked as a channel to direct me to a serendipitous moment. My submission hit the spot at just the right time.

Here's an extract from the start of the book:

The fingers of her brother’s hand wriggled in her grip, but she had no intention of letting go. The noise came again, a distant tinkling of tiny bells reverberated the cool air. Their sheep were quiet, heads down, aware. She bent her knees and whispered in her brother’s ear. He nodded, but she knew he didn’t understand. Sometimes she felt she was the only one who understood anything.

Their sun was low in the sky, casting their faces in a sub-orange glow. The landscape here was barren, rocks pushed through the grass, stubbling the distant view. She tugged on her brother’s hand, but he was reluctant to move. If the sound of the bells entranced her, then they had hypnotised him. He didn’t waver.

She tried to release her fingers but whereas before she had reached for his hand, now it was him who held her tight. She shook her fist, hard, and almost knocked him to the floor. His eyes were a mixture of wonder and fear. The bells continued. When it came to the Unknown, neither of them had any experience. You couldn’t rely on rumour.

"The Greens" was published on the 23rd September and can be purchased here via amazon. So far there is one review, from respected horror writer Gary Fry: "Overall I enjoyed this offbeat adventure a great deal...it's very Andrew Hook and his capacity to take aspects of everyday life and make magic out of them. An intriguing, readable and satisfying piece." If you do read the novella, please take a moment to place a review on amazon or goodreads or comment here. Feedback is always appreciated.