My short story, "The Marble Orchard", has recently been published in the anthology, "Ten Tall Tales", from NewCon Press and as usual I'm blogging about how the story came to be written for those who might be interested. Beware: there may be spoilers for those who haven't read it.

"Ten Tall Tales" is an anthology which marks part of the celebrations for the tenth year of publishing from NewCon Press. I've previously had several stories in NewCon anthologies, and they also published my 2009 novella, "And God Created Zombies", so it was with great pleasure to open an email from Ian Whates asking if I would be interested in contributing. The only guideline was that my story had to somehow include or revolve around the number ten and that also it needed to be no less than 5000 words.

If this sounds easy, then think again. The more I thought around the number ten, the harder the task became. Ideas were either too convoluted or too obvious. Ten is actually a difficult number to work with because it's so entrenched in our society; there are few quirks to be had with it. Initially I decided to write a piece based around Pythagoras who apparently considered ten to be a sacred number because ten equalled one plus two plus three plus four, with those numbers referring to existence, creation, life and the four elements of earth, air, fire and water. But whilst I found this an interesting starting point, I just couldn't wrestle sufficiently with the concept and the resultant story, "The Smell Of Petroleum", was so contrived and abysmally poor that I couldn't actually edit it because I found it too tiresome. A re-think was required!

Subsequently, I watched the 1941 b-movie "King of the Zombies", where one of the characters describes a graveyard as a marble orchard. I jotted the term down for a possible title and began to research graveyards, wondering whether I could work the number ten around it. I came across an article which mentioned an amendment to Section 74 of the London Local Authorities Act 2007 which (bear with me) empowered a burial authority to disturb human remains interred in a grave for the purpose of increasing the space for further interments where such a grave was over 100 years old. Essentially, due to a shortage of space, the law now meant that existing graves could be dug deeper to make space for new graves above them. Some of the articles mentioned the decimation of graves which - of course - means to reduce by the power of ten. Suddenly, I had my number. What if someone who managed a graveyard had to identify 10% of their graveyard plots to comply with the act? What kind of questions would that raise?

I try to shy away from the obvious in my fiction and this story could have developed in a number of formulaic ways, but hopefully I've done something a little different and - perhaps - surprising. Here's an excerpt:

He walked to the door, opened it. The sun had burnt through the cloud cover, dappling light across the vegetation; the evergreens almost visibly absorbing chlorophyll, with the deciduous trees yearning to push their buds through stiffened fingers. Nothing unusual was in sight. Ronson considered the light causing an optical illusion as it had refracted against the window, even as his legs took him down the steps and onto the pathway. He continued walking. His ears accumulating the sound of the breeze, the movement of the leaves, the birdsong, the faint echo of traffic. His movements were fluid, almost ethereal. After several minutes he reached the end of the pathway, which led in two directions around the older part of the cemetery, eventually meeting in a circle. He paused, listened. Nothing unusual. Why should there be? Ronson realised he still held his sandwich. He brought it to his mouth, bit. 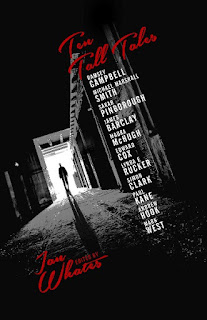 As usual when writing short stories the entire thing was composed in one sitting whilst listening to music. In this case the Mercury Rev album, "The Light In You", played on repeat.