The Call Of The Void

My short story, "The Call Of The Void", has just been published in 'Milk: An Anthology of Eroticism' through Salò Press, and as usual I'm blogging the background as to how the piece came to be written.

The title arrived after I discovered the French expression, l'appel du vide (translated as the call of the void) which is a term used to describe the urge one feels to jump from a precipice or high building when standing at its apex. If you've ever been to the Eiffel Tower, Empire State Building, or the Jaws of Death (in the Gampians, Australia) - as I have - then you might relate to this. The sensation of vertigo coupled with the freedom of falling and the rush which comes with that can be intimated from the threat of the drop. Perhaps it relates to our possible bird ancestors, or at least taps into that section of our subconscious which embraces fears in order to dispel them, but in any event it's common enough for the French to have a phrase for it.

Around the same time, I then discovered acrophilia - sexual arousal from heights or high altitudes. You can see where this is going...

Thirdly, I saw this photograph of a 1930s baby cage which I believe was originally part of a BBC news website article. These contraptions were designed to allow babies access to fresh air when living in apartment blocks. Would it be far-fetched, I wondered, for someone exposed to a baby cage to experience an adult thrill regarding heights? And coupled with that sexual thrill, would it be too far a jump - pun semi-intended (second pun possibly intended) - to experience l'appel due vide? 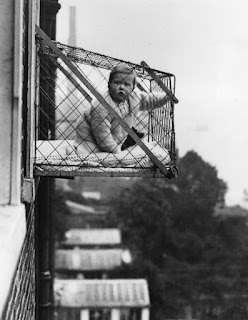 As often happens when I write, the convergence of two ideas together with a title kick-starts the piece and then it more or less writes itself. Finding a place to submit this story, however, wasn't easy - it's a 'literary' piece without any of my usual genre overtones, and as it's primary theme is masturbating off tall buildings the subject matter might have proved distasteful to some. As it happens, my partner's publishing company, Salò Press, announced a call for an anthology of eroticism and I cheekily asked if I could submit. Whilst this might seem like nepotism, rest assured I went through the same process as everyone else, including a vigorous edit. It's fair to say that "The Call Of The Void" has found it's spiritual home.

I've masturbated off the Empire State Building, the Bank of America Tower, the Chrysler Building, the New York Times Building, 70 Pine Street, the Trump Building when it was known as the Bank of Manhattan Trust Building, Citigroup Center, 8 Spruce Street, 30 Rock and the Bloomberg Tower. I've done it off 570 Lexington Avenue, 345 Park Avenue, 919 Third Avenue and 400 Fifth Avenue. I also did it off the Singer Building before it was demolished in 1968, and of course I did it within One World Trade Center and I'm not ashamed to admit it.

Finally, I wrote this story whilst listening to the Nick Cave album, Push The Sky Away, on repeat. 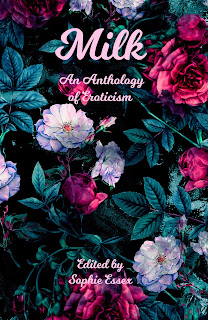