My short story, "Silent Bridge", has just been published in Confingo #8, and as usual I'm blogging about the gestation of the piece. There may be spoilers for those who have yet to read it.

This is one of those stories whose background is distinctly nebulous. Some pieces are fully formed in my head before I sit to write them, others I have a vague idea about, but with "Silent Bridge" all I had was the title and the time in which to write (this time is precious, and not to be squandered, so sometimes it's essential just to sit down and write on spec; as for the title, I can't remember where that came from). I recall researching silent bridge online, and finding references - perhaps unsurprisingly - to music, which I realised I could work into the story. I also found a piano piece online (also called silent bridge, which I subsequently played throughout the writing of the story), which set the scene, and I was also heavily influenced by the writing of Anna Kavan, whose novel, "Who Are You?", I had recently read and is also set in the tropics, detailing the relationship between the main character and her boorish husband. With this in mind, and pitching art against brutality, "Silent Bridge" was formed.

It was a difficult piece to place as it is more mood piece than story. And whilst there is story there, it is certainly open to interpretation. So much so that I'm not entirely sure as to the meaning of it's conclusion, although I certainly know what the story is about. This ambiguity continued with some readers, one of whom has said "I found it very compelling, even though I am not sure I understood it in a paraphrasable way - and the second reading didn't help, but deepened the compulsion." I enjoy writing works which make the reader think, and I believe the story has found it's spiritual home here at this great magazine. This is my third appearance within Confingo. 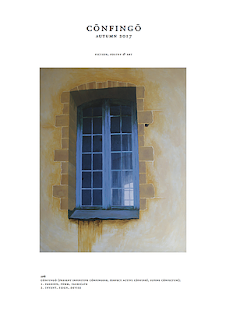 Marcus said she had legs he would kill for.

She hesitated in correcting him, then she said: you mean I have legs to die for.

He had nodded, slowly, without understanding. There was a bullishness to his behaviour, a dour brutality, which she found infuriating; however, it was this exact rough sensuality that tousled her in the sack. She would kneel astride him, her straight straw-like hair brushing his chest, moving her hips as though they were fingers on piano keys, that rhythmic, turgid movement.