This blog post is about the decline of the gig ticket.

It's easy to slip into old-man mode and start moaning, but 'electronic tickets' - what's that all about? I've seen some excellent gigs this year - including The Flaming Lips at Norwich UEA - but unless I save my generic print-out with the barcode which requires scanning at the venue, or unless I happen to actually remember it, then where are the keepsakes? Last year I caught The Rezillos and after the gig proffered the electronic print-out for Eugene Reynolds to sign. He looked querulous, as though it were a legal document..."this is a ticket?" I know some venues still issue these, but locally in Norwich none of the venues now actually issue anything. To be honest, it's a great loss.

I've saved almost all my gig tickets since my first show: The Stranglers at Norwich UEA, 14th November 1981. Unfortunately I don't have a stub for that gig - they were retained - and I would dearly love to see it again (I can remember it clearly, which isn't surprising, as I must have examined it for weeks beforehand, so excited that I was finally going to see my favourite band, so if anyone has a scan of that, please let me know), but otherwise I have kept most tickets to shows I've attended. Here are a handful: 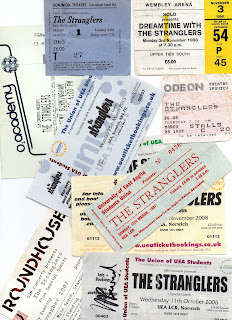 I've seen The Stranglers eleven times (not many in the great scheme of things, some people might see the equivalent during one tour), but I am going to catch them again next March... 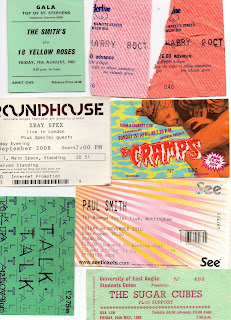 Here are some of my favourites. The Talk Talk ticket is the second gig I ever attended, on 12th November 1982, so is therefore the oldest ticket I have in my possession. Adjacent to that is The Sugar Cubes - the only time I've ever seen Bjork who is someone I would dearly love to see solo nowadays. Above that is a solo gig from Maximo Park frontman, Paul Smith, which was about as intimate as it could get with a 220 capacity, and which was truly memorable. Above that, The Cramps at the London Town and Country Club. I'd already seen them once before, in Norwich the previous year, and I would see them once again (in Australia the following year). A tremendous live band who I would buy a time machine for. Left of that ticket, X-Ray Spex. So lucky to see this one off show - another favourite band who I was too young to see at the time - especially considering Poly Styrene's untimely death a few years later. Above that, and The Smiths (note misplaced apostrophe), at another tiny (200 capacity?) gig shortly after their first Peel Session. They ran out of songs and played Handsome Devil twice (saw them again six months later and it was a tragedy - everyone had gladioli and they weren't as good as Red Guitars, the support band). Finally, top right, these stubs for 'Harry' are part of Deborah Harry's six night residency at the Borderline in London. A 300 capacity venue, the residency marked her first ever UK solo shows. We had tickets for the first night (£6) and were right at the front for a magical performance. So enamoured were we that we headed down speculatively on the last night, and after having waited, cajoled, hoped and despaired for the best part of eight hours we finally managed to buy tickets off a tout for £50 just as the doors were opening. And I think it's fair to say that's the best £50 I ever spent. Again, down at the front, literally arm's reach from Deborah who did touch my hand. The only time I've ever bought touted tickets (funnily enough I had a spare for the first night which I sold at face value - I've never upsold a ticket and never will).

Perhaps it was inevitable after that Deborah Harry gig the following would happen: 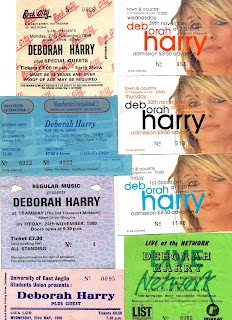 We saw every UK show on the follow-up tour (the Norwich ticket marked her tenth consecutive show in the UK, although it actually was the opener for another tour the following year). I can't begin to describe how superb these shows were or the emotions which accompanied them. Everyone's gotta be a fanboy sometime, right? I hadn't seen her fronting Blondie in their original incarnation, but I have subsequently seen Blondie five times since, live they are definitely something special. 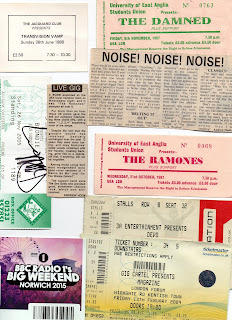 Here are a few oddities worth mentioning. That Ramones gig marked the first time anything I had ever written appeared in print, and I followed it up by reviewing The Damned a few weeks later. Can't believe I was twenty when I wrote those as they seem incredibly childish now, and they were only local paper stuff (without payment!), but that's where my 'career' in writing took off. Under those reviews are ticket stubs for long-time favourites Devo and Magazine, who I never thought I was ever likely to see (the light pours out of me, spuds!). Top left is a ticket for punk-wannabees Transvision Vamp. We took a punt on the gig as it was cheap, but the Jacquard was a hard-core punk venue and unfortunately no one was buying Wendy James' faux-punk style - some of the banter was truly acerbic. Underneath that is a Blondie gig ticket signed by Deborah Harry (the reverse signed by guitarist Chris Stein). I don't often get stuff signed - who wants to hang around afterwards - but some signatures are worth it. And finally - to confirm I don't simply see old punk bands - there's my stub for Radio 1's Big Weekend which included - OMFG!! - Taylor Swift. Fanboy comes home to roost again.

Flicking through these tickets has evoked so many memories which I'm sure wouldn't have been so fresh without them. And in some cases, have confirmed my attendance (apparently I was at a P J Harvey gig which a mate of mine recently thought I wasn't). I don't see the value in replacing these with barcodes and print-it-yrself tickets. What do you think? Am I an old curmudgeon, or has keeping these added immeasurably to the value of the gig? What's the best - transience or permanence? It's clear which side of the fence I fall.

Feel free to share memories in the comments.
Posted by Andrew Hook at 19:24