My fifth short story collection, "Human Maps", has just been published by Eibonvale Press and is now available for purchase in both hardback and paperback. The link to do so is here.

"Human Maps" collates twenty-one stories that cover a wide range of genres (in other words, slipstream). These pieces were originally published between 2010 and 2015 in magazines such as Black Static, Interzone, and Shadows & Tall Trees, as well as in anthologies from Eibonvale Press itself, NewCon Press, and others. As a taster, one of the pieces, "Old Factory Memories", can be read online here. What I find fascinating when re-reading these in one volume are the subconscious inter-story connections which create an overall gestalt that even I - who wrote them, after all - was not aware of. This isn't limited to my usual themes of identity, memory, and the nature of reality, but also subtle connections simply through the placement of each story within the book's running order. For example, my Japanese love doll story, "Monster Girl" is followed by my Mexican story, "Beyond The Island Of The Dolls", which features dolls of a different kind. Title story, "The Human Map", obliquely examines the effects of an alien race traipsing through our memories to unravel secrets, and this is followed by "Blue Sky World" where the human race itself are keeping aliens secret. Whereas it might sound as though these connections are intentional - and perhaps, clumsy - the reverse is actually the case. An intuitive placing of stories in a certain order not only emphasises my preoccupations and methodology, yet also has created something greater than the original works themselves. Because of this, the book feels fresh to me, and I'm thoroughly enjoying re-reading it now that it's in print. I hope my readers will likewise enjoy the experience. 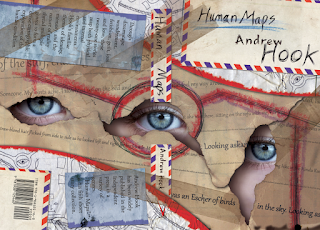