If I'm associated with anything it's writing short stories, however here's a long story about a short story collection, "Slow Motion Wars", which has just been published by independent publisher, theEXAGGERATEDpress.

The collection is co-written with slipstream supremo, Allen Ashley. Allen remains the only author I've ever collaborated with, although I'm not the only author Allen has collaborated with. We were at a TTA Press event in London sometime in 2004 (I think) when another author, Nels Stanley, compared our writing styles and themes and wondered/suggested whether we had ever considered a collaboration. It wasn't something I had previously thought of, but almost from nowhere a title - "Abattoir Girl" - was being discussed and mentally Allen and I began making notes. From such small seeds large acorns grow. 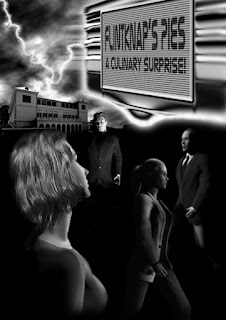 "Abattoir Girl" was written in the same way that we would then go on to write other collaborations. One of us would start with a title and around 500 or so words, and then we'd bat it back and forth between us until it was done. From this, a third writing voice emerged. In hindsight, I feel the style resembles 70% Allen's and 30% mine, probably because I'm a bit of a chameleon even though the stories were written roughly on a 50/50 basis. Reading these pieces now I'm hard-pressed to find the joins, but not only that I can't always remember which of us wrote what. I consider this a mark of success (although perhaps not for my memory - I believe Allen's recollection is clearer). What's evident, however, is that these pieces would not have been written by either of us individually, and that they were co-dependent on the other author being present.

I can't speak for Allen, but those stories I started tended to be titles and ideas that I had which didn't quite feel right for me. I would probably never have developed "Mermaids In A Snowstorm" or "Miss Treat" (for example) without Allen's input.

A body of work began to grow. We submitted "Abattoir Girl" to the British Fantasy Society magazine, Dark Horizons, where it was published, and subsequently pieces appeared in Jupiter SF, Scheherazade, Polluto, Midnight Street, and other publications. Clearly, a collection was building.

We approached a couple of indie publishers, but mostly their lists were too busy for new projects. Being the entrepreneurial type, I suggested to Jenny Barber who ran Here & Now magazine that perhaps Braden Press might expand into collections and she happily decided to take the project on in 2006; although unfortunately circumstances changed and she was unable to run with it, closing the press in 2007. I then contacted the new(ish) press, Screaming Dreams, run by Steve Upham who was very happy to publish the collection which we had decided to call "Slow Motion Wars" after one of the short stories ("Like A Slow Motion War"). This titling seems to have been prescient as ten years were to pass between first acceptance and final publication, leading some to dub the project Slow Motion Publishing...

In all fairness to Steve there were various health and financial problems which dogged Screaming Dreams which were out of his control. Many independent publishers are one-person businesses, and should anything happen to that person then delays are inevitable. Likewise, because this was a side-project for Allen and I, and we had numerous other books published during this period, we probably didn't push it as much as we could have. Every six months or so I'd drop Screaming Dreams an email and Steve would respond with apologies and assurances that his scheduling would get back on track, and there then might be a flurry of activity before I realised another six months had passed and we would begin the process again. Things looked promising when the Ben Baldwin designed cover was revealed, but further delays and mishaps occurred and publication was once again put aside. 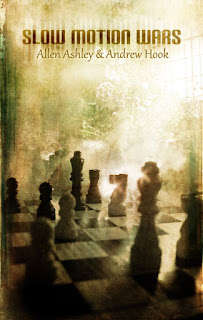 Last year, however, I realised that eight years had actually passed since Steve had accepted the book for publication and quite clearly - despite our understanding of his situation - we needed to withdraw the project and place it elsewhere. At FantasyCon that October we approached Terry Grimwood of theEXAGGERATEDpress, who was immediately interested. We amiably parted company with Screaming Dreams and were able to retain the Ben Baldwin cover. Allen re-read the stories and made the inevitable changes necessary to bring the book up to date - particularly with what once had been topical references and also updates to now obsolete technology. Finally - finally - the book has been published and is available to purchase.

Now...if you've stuck with me thus far...you might even be interested in buying it. Don't take ten years! Here's the blurb:


Two heads are better than one! This collection brings together two of the brightest stars in the science fiction, slipstream short story firmament. The combined talents of Allen Ashley and Andrew Hook have produced fourteen delicious, yet subtle, seamless stories full of wit, imagination, invention and emotion. What is the secret behind the gated community of “Xanadu Springs”? Will the online pharmaceutical “Vitamin X” really guarantee you fifteen minutes of fame? What is the best strategy to ensure victory at “Air Hockey 3000”? And can Lynsey the lowly “Abattoir Girl” successfully lead the resistance against the alien invasion? Pass along Pohl and Kornbluth; move over Maynard and Sims; forgetski the brothers Strugatski. Ashley and Hook are the new noises on the block.
Posted by Andrew Hook at 09:58