My short story, "Sömntuta", has recently been published in issue eleven of Lighthouse Magazine, and as usual I'm blogging a few comments as to how the story was written. There will be spoilers for those who have yet to read it.

My inspiration for this story came from the title and a quote. Sömntuta is a Swedish word meaning sleepyhead and also the poppy flower. I discovered the word in a roundabout way via a friend's Swedish girlfriend and it seemed intriguing enough for a story. The quote was from Albert Camus: "In the depths of winter, I finally learned that within me there lay an invincible summer." The quote felt relevant to a story set in Sweden. Unfortunately, when Lighthouse published the story they made an error in not including the quote (for which they graciously apologised). Understanding the ending of the story is pivotal to having read the quote at the beginning, so it will be interesting to see how the piece is received.

In "Sömntuta", Isobel is an English girl holidaying reluctantly in Stockholm following the break-up of a long-term relationship. She meets the enigmatic Isak, but just exactly who is he and what is his role? As usual in my stories, there are no straightforward answers. Isobel becomes transformed - or wakes up - but how long will it last?

Isak's smile resembled a sinkhole on a pine forest floor. "Once they taught us about suicide and now they speak of quantum suicide."
"I'm sorry?"
He spoke into the elements. "Quantum suicide is a paradox, a thought experiment. You know of Schrödinger's cat?"
"I know it needs feeding."
Her joke failed to gain a laugh.

"Lighthouse #11" is available here and contains fiction and poetry from a large number of contributors.

I wrote the story whilst listening to "Vespertine" by Bjork on repeat. A special mention should be given to my partner, Sophie, who assisted in line-editing this piece and turned it around from a mediocre first draft into something publishable. 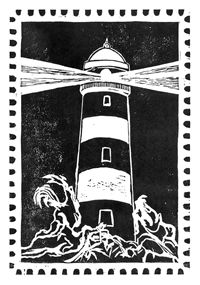