A Galaxy Of Starfish

The publication, "A Galaxy Of Starfish: An Anthology Of Modern Surrealism", is now available through my partner's publishing company, Salò Press. I had a role in assisting with submissions and typesetting the book, so I thought I'd blog a few words on how the publication came into existence. 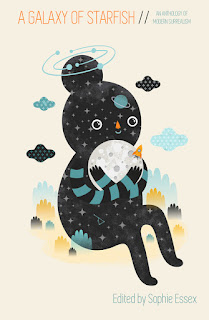 For a few years my partner, Sophie, has run an experimental poetry/prose magazine, Fur-Lined Ghettos. It's been a relatively successful publication, usually around 60pp in length, and through this process she has come into contact with several poets who she thought she would like to work with in greater depth. The idea began to bubble that she could start publishing poetry collections and around the same time the possibility of a surrealism anthology began to take shape. Both of us have a strong interest in surrealism - in the beauty that connects seemingly unconnected words and images - and we had found that some of the work we had published in the magazine by young poets certainly brushed those parameters. Sophie had also been reading work by writers such as Tristan Tzara and Robert Desnos, and via this had watched a 1928 short film by Man Ray based on a script by Desnos, titled "L'Étoile de mer". From these beginnings our surrealist anthology, "A Galaxy Of Starfish", germinated.

We announced a call for submissions in January 2015 and began to receive a mixed bag of material, some of which had no bearing to surrealism at all. Of course, the term 'surreal' is now widely used (and abused). In particular, we found short story submissions often relied on a 'surrealist' twist rather than being surrealist throughout. That wasn't what we were looking for. Of course, since the original Surrealist movement, 'surrealism' has permeated every strata of the media and what might have been startlingly original in the 1920s can now be commonplace. Neither of us claim that we can definitively pin down the term, but we knew what we liked when we saw it. Over the course of a year the anthology gradually began to fill. The submissions were worldwide: we accepted work from the UK, USA, Canada, Greece and Israel (where work was originally written in a foreign language we decided to print it in both the original and in translation). We found ourselves 'called out' by one surrealist organisation and asked to justify our position with a manifesto or artistic statement (which we declined). Several times we wondered whether we would get the material we needed: it came in fits and starts. In the meantime we had published two poetry collections, "Actual Cloud" by Dalton Day and "Father, Husband" by Scherezade Siobhan. Finally, at the beginning of this year, we realised the anthology was complete and began the process of typesetting and making it perfect.


It's been an interesting process. Whilst I've previously edited anthologies (the award-winning "The Alsiso Project" and "punkPunk!"), Sophie's experience had rested solely with the magazine. She's found it an often frustrating but ultimately satisfying process to edit something under a theme. Perhaps we'll do it again. 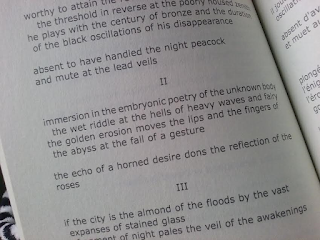