My short story, "Us!", has recently been published in the anthology, Creeping Crawlers, edited by Allen Ashley for Shadow Publishing. As usual I'm posting a few comments as to how the story came about for those who might be interested. There will be spoilers.

"Us!" was a story idea I'd had for some time. I can't remember exactly how it popped into my head, but the idea sprang from the 1950s movie, "Them!", in which ants made giant through radioactivity threaten small town America. Perhaps it was because of the emphatic title, however I wondered about telling the story from the ants' perspective. Many SF movies - and certainly many horror movies, if not almost every movie - are built around a them and us scenario. I thought it would be interesting to flip it on it's head. However I never got around to actually writing the thing.

Everything changed when Allen announced he was editing this anthology. I now had an impetus to write. So I popped "Them!" into the DVD player and made some notes. I knew it would be very short - you can't really stay in an ant's head for too long - and I wanted it to follow the movie's storyline but in a way in which certain terminology and understanding was more ant-like than human. I couldn't write the story in ant, after all (click click click clickety-click), but I didn't want it to be too human either. Hopefully I struck the right balance. Here's a bit of it:

We knew we were everywhere, had been for a over a trillion sunrises. In some of our colonies they worship ancestors trapped in amber. Yet despite our experience we knew we had disadvantages. Our enemies had superior vision. Their flyers did not lose their wings after the nuptial flight. Their males rarely died after mating. We had strength - the ability for one to lift twenty. Yet our aggressors had non-organic structures which served to augment them.

The style is quite different from my usual writing, which is probably why it took a definite market to exist for me to write the piece. But I'm pleased with it - it did exactly what I wanted it to. And the fact that it is the lead story in the anthology makes me very happy.

A final thought: Each time I write a story I usually listen to a piece of music on repeat. There was only one song I could possibly play whilst writing this: Antmusic by Adam and the Ants. I played it 35 times on repeat and I don't even like the song. I guess I just like suffering for my art. 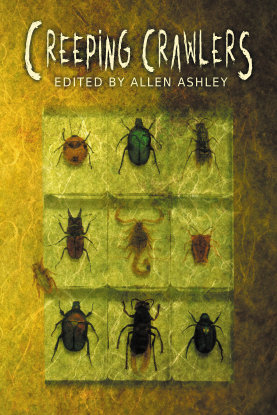