Last week saw publication of my new novel, "Church Of Wire" so I thought I'd blog about how the novel was created in the hope of stirring some interest. There will be spoilers.

"Church Of Wire" is the second in the series of my crime novels featuring Mordent, a PI who began life in short stories and made his first full-length appearance in "The Immortalists" last year. Mordent is a very easy character for me to write. Like most of us he's a complex individual with conflicting moral concerns, but also he's very simple. It's the dichotomy between the complex and simple which fascinates me - both in my own life and in art. It often seems to me that people like to pigeonhole themselves with a fixed sense of morality and identity, whereas in reality the opposite is the case. I believe - for example - it is possible to hold two conflicting opinions simultaneously and equally believe in both. This is why I feel comfortable in describing Mordent as being complex yet simple.

I had the title for a while without being sure whether to use it for a novel or a short story, however after completing "The Immortalists" I realised the feel of the title very much fitted into the neo-noir books I had begun to write. The main thread of the story is also something that was bubbling at the back of my mind for some time: I was going to write about a serial killer who targeted survivors of previous serial killer attacks.

It seemed such a neat concept that I wondered why no one had done it before - this is where the comment box below comes in useful as you can list everyone else who has.

As well as this thread to the novel I knew I had to work out how the Church of Wire fitted into the story. I'm not a religious person, so I felt I needed a different kind of church for this book. A few years ago I wrote a story, "Caravan Of Souls", which hinged on the biblical idea that God created the world in six days and rested on the seventh. In that story I followed this through with the suggestion that whilst God was resting on the seventh day he slept and dreamt - and that those dreams also formed part of creation (the weird stuff that exists that we find hard to understand). I decided to expand on this and utilise it as a concept for the Church Of Wire to peg its beliefs onto.

All I then had to do was to tie the two strands together (or not, as the case might be), weave it with noir, and have my regular ensemble cast (Mordent, PI; Hubie, informer; Martens, mortician; Kovacs, police chief and Morgan, bar owner) interact with a few suitably named villains (Reflective Tony, The Frame) and a love interest, Jessica. Not forgetting Astrid, Mordent's new bubblewrap girl.

Paul Finch, author of the Heck series of novels including "Dead Man Walking", says: Beautiful prose, a razor sharp eye for detail, and chills aplenty. Hook rebirths the noir, but with a very hard darkness and a disturbing air of mystery.

The book is available in both paperback and on kindle. Naturally kindle is cheaper. Please consider checking out a copy, as the success of this book will determine whether the next two books in the same series are commissioned and it's too early for Mordent to die a death. Whereas the book can be read as a standalone novel, here are the links to "The Immortalists" in both paperback and kindle if you wish to be particuarly generous. 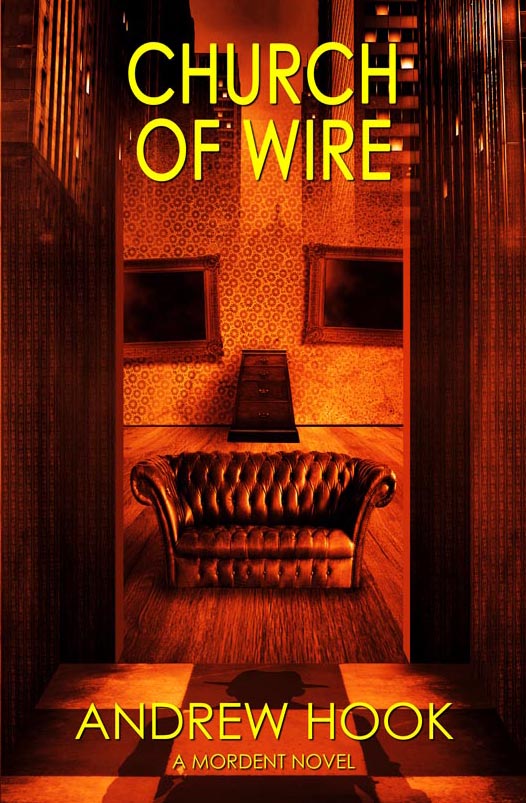 The official blurb is as follows:


Ex-cop, Mordent, is an irascible, anachronistic PI with a noir sensibility and a bubblewrap fetish. Hired by the enigmatic Isabelle Silk to unearth dirt on a business associate, he becomes involved with Jessica – a floozy with a fake Southern Belle accent – and hunts the Residue Killer: a twisted individual intent on despatching survivors of previous serial killer attacks.

All the trails lead to the Church of Wire. Yet does this surrealist religious sect really lie at the heart of the killings?

Church of Wire is the second in a series of exciting crime novels putting a neo-noir twist on the genre conventions of bums and dames, corruption and perversion, and cops and informers; all played out on rain-soaked streets amid a shadow-filled city.

Praise for "The Immortalists": ‘The interplay between Mordent and the other characters is a delight to read, as is the prose throughout with its hard boiled sensibilities, short sentences that cut like diamond on glass and metaphors as apposite as they are off kilter.’ Peter Tennant, Black Static