My short story, "Soapsud Galaxies", has recently been published in the new issue of Jupiter SF, and as usual I'm blogging just a few lines about the birth of the story. Be aware there may be spoilers for those who have yet to read it. 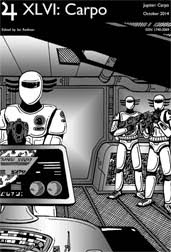 The story is quite a short piece based around a simple premise (one that, in retrospect, is similar to a chapter in Ray Bradbury's "The Martian Chronicles"): what if aliens could transform themselves into people we could love? In my piece, aliens are integrating with human society in order to breed, their appearances conforming to our individual preferences for beauty in order to maximise this. As humans, we have no choice but to make that connection even when understanding it for what it is. Told with a little bit of humour and a little bit of pathos I hope it hits the right spot with readers.

The title quite simply came from looking at a washing-up bowl filled with slowly rotating soapsuds and realising how closely it resembled the universe. Sometimes an idea can be found in the most natural of locations.

Where my story probably differs from a standard SF tale is that my character quotes from the French New Wave movie "La Maman et le Putain", directed by Jean Eustache. The quote I've used seemed to summarise the sexual imperative. I often find movies from this period spark my fiction and am pleased as to how it works in this story.

Jupiter #XLVI (issue 46 for those who don't know their roman numerals) also contains fiction from Ray Blank, Lou van Zyl, Rod Slatter, Richard Foreman and Chris Bailey. The cover is by David Conyers. It can be ordered here

As usual, I wrote "Soapsud Galaxies" listening to one CD on repeat. In this case it was Galaxie 500's "On Fire".
Posted by Andrew Hook at 09:09