I thought I'd do a quick blog post as to my literary achievements during 2013.

Early in the year I completed one novel begun at the tail end of 2012, an SF-apocalyptic future thing titled "Body And Soul". And today I've just completed a new novel, "People I Know Are Dead", which is another crime pulp neo-noir featuring my irascible PI, Mordent. This year I've sold two other novels featuring Mordent, "The Immortalists" and "Church Of Wire", to Telos Moonrise for publication in 2014/2015.

I wrote twelve short stories this year: "Bullet", "Dirty Snow", "Burning Daylight", "Shoot For The Moon", "The Frequency Of Existence", "Blood For Your Mother", "Making Friends With Fold-Out Flaps", "Softwood", "Soapsud Galaxies", "Interference", "The Opaque District", and "A Knot Of Toads".

I sold ten short stories: "Rain From A Clear Blue Sky", "Bullet" and "A Knot Of Toads" to Black Static, "The Aniseed Gumball Kid" to PostScripts, "The Caged Sea" to Unspoken Water, "Beyond The Island Of The Dolls" to Postscripts To Darkness, "Interference" to Chiral Mad 2, "Shoot For The Moon" to Monomyth, "Softwood" to an anthology from NewCon Press I cannot name til next year, and "The Opaque District" to the Horror Uncut anthology.

The following six short stories appeared in print this year: "Rain From A Clear Blue Sky" in Black Static #33, "The Caged Sea" in Unspoken Water #4, "Bullet" in Black Static #34, "The Cruekus Effect" reprinted in Best Weird Fiction Vol.3, "Tetsudo Fan" in the Rustblind and Silverbright anthology from Eibonvale Press, and "Kodokushi" to PostScripts #30/31.

I have a handful of stories awaiting publication that were accepted in 2012/2013, a novella, two short story collections, and one novel under consideration, and a collaborative story collection still awaiting publication. I am also in the process of editing an anthology of punk inspired stories, titled "punk!Punk!" for DogHorn Publishing, and I have also worked on two issues of Fur-Lined Ghettos with my partner. 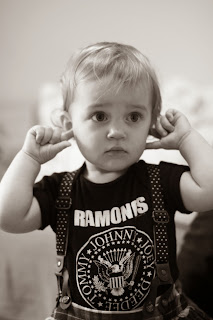 Not bad considering this little one is getting more adventurous, and also that I work full-time Monday to Friday, work part-time alternate Sundays, freelance typeset and proofread often in the evenings, and have one hundred and one other things on my mind. Seasonal trumpet blowing time yet again!
Posted by Andrew Hook at 12:52