Rain From A Clear Blue Sky

I've got into the habit of blogging about how various short stories have been written following their publication. Continuing this theme, here is the background to my story, "Rain From A Clear Blue Sky", which was published this month in Black Static #33. Please note there are spoilers in this blog which might affect your enjoyment of the story if you haven't already read it. (Incidentally, following on from an earlier blog post about writing to music, I wrote "Rain From A Clear Blue Sky" whilst listening to "Takk" by Sigur Rós).

Sometimes having a day job can be beneficial. One of my co-workers, Neil, pointed out an article he had seen on the Dyatlov Pass incident. Immediately I was intrigued by this true story where the deaths of nine skiers in Russia had been officially investigated and attributed to a compelling unknown force. To summarise from Wikipedia - and without giving too much of my story away - "Investigators at the time determined that the hikers tore open their tent from within, departing barefoot into heavy snow and a temperature of −30 °C. Although the corpses showed no signs of struggle, two victims had fractured skulls, two had broken ribs, and one was missing her tongue." 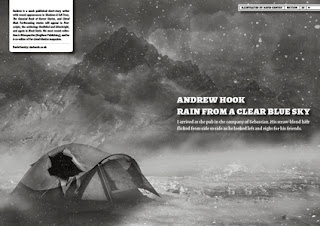 Naturally this mystery appealed to me, but I was loathe to write about it directly. For starters, real people had lost their lives. I didn't want to fictionalise them purely for entertainment - and as I wanted this to be a horror story (albeit, a slight one) any 'explanation' of what might have happened would inevitably be horrific. Whilst it would be unlikely any relatives would read the story, I wanted to avoid such directness with those involved. The idea then came to me that I would write the story from the point of view of a new group of travellers also journeying in the region, with the idea that knowledge of what had happened before would prey on their minds and would be implicit in their own reactions to the circumstances they found themselves in.

I usually need several ideas to mesh together before getting a full plot for a story. One of these is the title. I already had "Rain From A Clear Blue Sky". The title came to me quite naturally, during a rain shower from a blue sky. Sometimes the natural world can throw up surprises, but also metaphors. Something unusual which might be naturally explained appealed to me within this story.

Finally, upon thinking of wilderness scenarios, I remembered stories of the third man. I was aware there have been instances where lost explorers have felt there was an addition to their party during times of trouble, and who they felt might have guided them out of difficult situations. The third man is usually described as helpful, but it crossed my mind what would happen if they were malignant. Or maybe if the third man had an identity crisis. It didn't take long for me to realise my party of explorers would have a third man with them. And also that the third man should be the narrator of the story.

So, there we have it: the Dyatlov Pass incident, the title, the third man. All these elements came together in this story. If you've read it, please comment below. If you haven't, then please consider buying the magazine which also contains fine stories by James Cooper, Carole Johnstone, Michael Kelly, Tim Casson and Gary McMahon, with DVD and book reviews and comment columns. Black Static is the UK's finest magazine and further information about this issue is here. 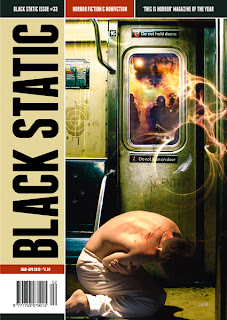