My seventh short story collection, Frequencies of Existence, is published today through NewCon Press, so I thought a short blog post to celebrate this was in order. The collection contains twenty-four stories, four of which are original to this book. The other stories have been previously published in magazines and anthologies such as Black Static, PostScripts, and Strange Tales amongst other places. As usual for me, there are a mix of styles, which might include elements of SF/F/H but perhaps are most appropriately described as slipstream. So general weird speculative fiction with a focus on the interplay of relationships set against unreal scenarios. Here's the cover: 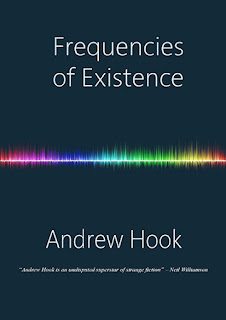 To give a flavour of what's on offer, I'm going to quote from a handful of my favourite stories in the book and explain why they resonate with me.

First up is "Your Golden Hands", originally published in PostScripts. This is a conquistador-type story, albeit set on an alien planet. The human fixation with gold remains, but where exactly is it?

We were of the understanding that you didn’t really know what we were looking for. Tradition told us that material things held no meaning for you. Metals, gems, other natural resources were not there to be exploited, just to be used as and when you saw fit. Like a hermit camped in a battered tent in the desert with an unknown oil well hundreds of feet beneath him, you had no urge to seek what you didn’t know was there. Still, we kept the nature of our quest secret.

- - -
Another favourite is "The Last Mohican" which is my punk story. Punk was a huge influence with me as an individual and has accordingly affected many of the decisions I have made in life. This story has an alternative reality where 1976 was a turning point in British politics and the ethos of punk was accepted and still continues to the present day. But what happens when you're the last punk standing from that era?

Everyone says they remember where they were when Thatcher’s government came down. Of course, we were all post-punk then, but the ragged sentiments from the three-chord thrust were still running through our veins. And by that time we had the whole country behind us. Whoever said the revolution starts at closing time had been right. We had a black and white TV in those days, but I swear you could see the orange flames flickering at the Houses of Parliament.

My favourite out of the new stories is "Always Forever Today" where a film critic ruminates over an article he has to write about his most influential film, which in his case is Roman Polanski's feature debut, "Knife In The Water". The idea for this story came about through watching an older black and white film and realising that not only all the actors were now deceased, but also all of the original audience for the movie would also have died. There's a train of thought that suggests immortality is achieved through film, but of course that isn't the case. And what if film itself might also decay?

Donald had never been a fiction writer, although some of his critics – even a critic can have critics – considered him otherwise. Nevertheless as he climbed the stairs to bed he remembered a story idea he once had. That instead of movie stars adhering to the immortality of their screen presences, on each viewing they would age incrementally, until finally they would continue beyond the point of their deaths, trapped within the movie’s cycle, their remaining flesh performing their roles, until everything rotted away and returned to dust and only disembodied voices could be heard.

- - -
Finally, a favourite with many readers who have expressed an interest in my work is "The Day My Heart Stood Still". This features an extraordinarily simple premise: what if death has been eradicated so that generations have passed and no one can remember it. And then what happens should someone die? I consider this piece to be Ray Bradburyesque in the telling. Here's a bit of it:

I sat beside her for a few minutes before glancing at the clock. Dad would be home soon and would know what to do. On a whim I reached out and peeled her left eyelid over the cornea. The returned stare was vacant but again she didn’t wake. I was getting bored. I stood and wandered to the doorway. I was also getting hungry. The eye regarded me impassively. I turned off the light but the eye was still visible, so I nipped back and pulled the lid down again before returning to Charlotte and the pool.

- - -
So that's a very brief taster of what's in the book. I think it's quite eclectic and brimming with ideas, but then I would say that. So here's what others have said:

“For lovers of metafiction, poetic text, intellectual narrative and elusive characters who linger to haunt you. The thrill you get reading Andrew Hook’s weird collection is out of this world. It’s a pastiche of the literary strange. You’ll want to read more of Hook after this.” – Aurealis, review by Eugen Bacon

“Andrew Hook is an undisputed superstar of strange fiction” – Neil Williamson, author of The Moon King

The book is available as a limited edition signed lettered hardback and a regular paperback. Pop along to NewCon Press for your copy today!
Posted by Andrew Hook at 08:56