My flash fiction piece, "Life + Illusion = Love + Dream", about the life of Pete Shelley has just been published in the anthology Love Bites from Dostoyevsky Wannabe, and as usual I'm blogging a few lines as to how the story came about for those who might be interested. It's 445 words in length.

Like many of my generation, punk had a massive impact on my formative years. Even though I was just 9 years old in 1976 I was aware of the scene and the brouhaha it was creating. The first single I actually bought was The Stranglers' "Five Minutes" in January 1978, and over the next few years I both kept up with the scene and caught up with the material I had missed. Buzzcocks - inevitably - were part of this education. Whilst I tended to avoid compilation albums, "Singles Going Steady", was a firm favourite. Shelley's succinct, heartfelt lyrics about relationships and breakdowns, backed with punchy furious music held an immediate appeal. I saw them live several times, mostly in the latter half of their career, and at every gig it was a joy to hear the material, a total immersement in mosh-pit mayhem. 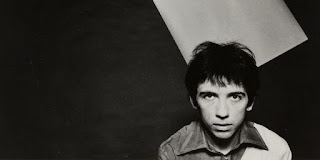 The last time I saw Buzzcocks was in May 2018. I had dithered about going, as the previous time I'd seen them the sound hadn't been great and it took me a while to make up my mind. But it was an excellent gig and I fell in love with them all over again. Upon leaving I was determined I'd always see them when they toured, more than aware that too many soldiers of punk were no longer with us.

And then, only seven months later, Pete Shelley no longer was.

When I heard about the "Love Bites" anthology it was too late to submit a full-length piece, but the editors were still looking for flash fiction. An anthology to celebrate Shelley and the music he helped to create was a timely idea and I knew I wanted to be part of it. Shelley's death was unexpected and - like Mark E Smith's earlier that year - hit me hard. Whilst I don't tend to write flash fiction, the brevity suited the punk material, and I decided to write a fictional biopic covering Shelley's life through 'backstage' snapshots including direct quotes I had discovered watching interviews online. One of my favourite Buzzcocks songs, "Everybody's Happy Nowadays", contains one of my favourite lyrics ("life's an illusion / love is a dream") which formed the basis of my title. And as usual, once I had a title, everything fell into place.

Flash fiction often cannot provide much more than a snippet of the kernel of an idea, and I can't pretend that "Life + Illusion = Love + Dream" is particularly profound, however I think I've done Shelley justice, and that's all I can really hope for. I'm looking forward to reading the other contributors in this anthology too. 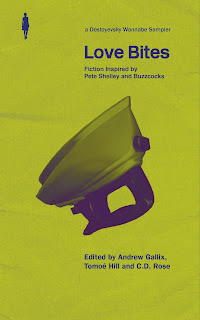 Here's an excerpt which is a direct interview quote. I love this. A sly shy nod of amusement which is more than a throwaway response and which I feel encapsulates Shelley's warmth and humour.

Interviewer: For you, where did punk come from?

Shelley: A little old lady in Dorset sent me a note saying check this out.

Finally, whilst I usually write listening to music, quite strangely I didn't do so in this instance. However I did watch many YouTube interviews with Shelley on repeat. 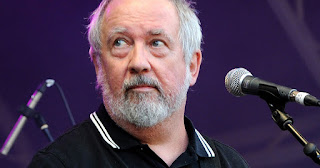