Of Course, A Girl

My short story, "Of Course, A Girl", about the life of Zelda Fitzgerald has just been published in the anthology Afterlives of the Writers from 5th Wall Press, and as usual I'm blogging a few lines as to how the story came about for those who might be interested. Beware, there are likely to be spoilers for those who haven't read it, so it might be best to purchase a copy before reading on.

It was the writer Rhys Hughes who brought the guidelines of this anthology to my attention. Immediately I knew I wanted to write something. The guidelines were to choose a dead writer and write about the afterlife from their perspective. Considering I'd recently completed twelve celebrity Hollywood death stories blending fact and fiction from a similar angle for a collection titled "Candescent Blooms" (currently being submitted), the style of fiction required for the story had become natural to me. The only question was, who to pick?

The provisional site for the anthology contained a list of writers already included. I noticed a distinct lack of females. The reason assisted with my decision to choose a dead female author. But who? In all fairness, it didn't take long to make my choice. The relationship of Zelda Fitzgerald and her husband F Scott Fitzgerald had been one that had fascinated me for some time: how there were accusations of plagiarism on both sides, of how Zelda's career would always be foreshadowed by her more famous husband, how her fiction had been sidelined in favour of his. As myself and my partner - the poet, Sophie Essex - also work ideas off each other, the dynamics in such a relationship have always intrigued. So, Zelda it needed to be. 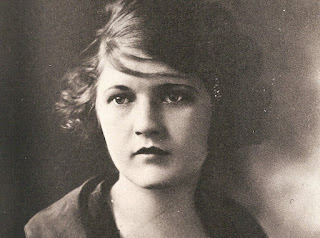 Perhaps the reasons can also be given in the email I sent to the editor, explaining my choice: The angle with Zelda and Scott is that Scott often ‘stole’ from Zelda’s diaries which meant there was a lot of ‘her’ writing in ‘his’ writing. Much more than the influence of another person, or simply including material from their lives, it was her actual written words which made it into his books. At first that relationship didn’t bother her, but gradually she began to resent this kind of plagiarism, particularly as Scott became increasingly dismissive of Zelda’s own attempts to succeed artistically (whether in literature or dance or art). So whilst it might be wrong to suggest that Scott only succeeded because of Zelda, there is a strong argument that without her his novels would have been different. In her only novel, Save Me The Waltz, Zelda effectively turns the table on Scott as the plot reflects a semi-autobiographical account of their life and marriage. Scott was furious that she included scenes which he had been intending to use himself - so it was a marriage of idealization for both at the start which was informed and reflected within both of their works, which then gradually turned sour. Zelda died in a fire at a psychiatric hospital, and my story represents her reflecting on her life shortly after that death. I chose to write about her rather than Scott, because I find her the most interesting character, but also because of the extent her life poured into his, leaving her more of a shell when it came to her own fiction. If we look at it from the view of her afterlife, her creativity was often belittled by Scott so he could use her words himself - I see her considering that loss, evaluating it. And that’s why I thought her to be an ideal subject for my story and this anthology.

As with my Hollywood stories, the piece mixes fact, fiction, gossip and quotes to create a composite reality - a potted fictionalised biography - told by Zelda as she dies in the hospital fire that consumes her. This is the total of her afterlife.

Here's an extract: I reach for the bottle, my carelessness knocks it from the bedside table. Somewhere in the house I hear F's fingers hitting his keys like a plague of locusts. I shuffle my memories: pick and discard. The flowing of words is a two way process, and I am coming - slowly, but defiantly - to my own moment on the page. Meanwhile, picking up the bottle from the floor, uncapping it, gazing through the contents, it is clear that as light passes from one medium to another, for example between air and glass, it bends. I swig, look again.

The title, "Of Course, A Girl", which I feels both emphasises her sex and being proud of it but which also signifies the dismissal of her fiction because of it, comes from an F Scott Fitzgerald quote about the publication of his first novel, "This Side of Paradise": I have so many things dependent on its success - including, of course, a girl. 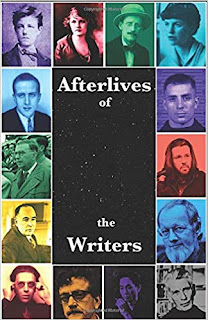 Finally I wrote the entirety of the story listening to the title track of Throbbing Gristle's "20 Jazz Funk Greats" on repeat.
Posted by Andrew Hook at 20:14