Volta: an obscurity of poets

An extract from my neo-noir crime novel, "People I Know Are Dead", has recently been published in Volta: an obscurity of poets published by Salò Press. This anthology is a project birthed from a series of literary nights in Norwich throughout 2017 - titled Volta - which have mostly occurred at The Birdcage in the city centre.

My partner, Sophie, runs these mostly-monthly events which regularly achieve audiences of between 40-60 people and feature a mix of invited readers and open-mic from the floor. The nominal £2 entry fee covers payment for the room and also enables her to pay the main readers. After the first three nights in 2017 it was clear that a profit was going to be made from the event - a profit which she was reluctant to keep. The idea came that an anthology of the year should be produced - funded by that profit - which would then be given away free to contributors with any surplus copies sold at a discounted price, the sales of which would enable her to continue bringing fresh voices to the event with the book also being a thankyou for those who have participated. The resultant anthology contains single pieces from 58 contributors who read during 2017, the only omissions being a handful of performers who decided not to contribute and several who couldn't be traced. The pieces chosen were those performed on the nights and the running order matches that of the events.

Norwich is a Unesco City of Literature with a vibrant local literary scene. This anthology perfectly encapsulates a year in this scene, as well as providing many of the contributors with their first publication credit alongside more established poets/prose writers. 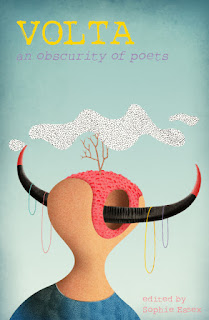 I've occasionally read open-mic at the event and therefore was eligible for the book. I chose an extract from my yet-to-be-published neo-noir crime novel, "People I Know Are Dead" (the third in my Mordent PI series). It's a piece I've often read at crime events. My PI sees the world through noir-coloured glasses and in this short extract he experiences a noir-dream where the dialogue is exclusively noir slang. It makes sense to include this here in it's entirety:

I met the stool-pigeon watching the bangtails. He was a bit of a daisy and we bumped gums for a while before getting down to business. The pigeon was nervy out in the open and suggested a dive which looked more like a can house despite the canary doing business with gusto on a low stage. Nearby a tomato with great gams drank tiger milk and in one corner some bums obviously out on the roof shot rats and mice for mazuma.

The pigeon was a weak-sister even to be peaching. He took a smell from the barrel but was hinky and twitchy as though he expected droppers at any moment. I told him to break it up or I'd take it on the heel and toe, but I was waiting for the Chinese angle. Then a guy broke in with a bean-shooter and the wild eye of a snow-bird. The pigeon was a wrong number, probably on the nut, and I was the patsy set for a fall.

I was in a jam, told the pigeon to climb up his thumb and then kissed him in the kisser to make sure. The dive lit up with Chicago lightning and the pigeon got zotzed. I pulled out my roscoe and hit the snow-bird across the button, smashing his beezer into his puss. Then the bracelets were on and he was bundled into the boiler, set to fry or gain some Nevada gas under glass.

Later I returned to the joint and chinned with the tomato who wasn't fussed I held a ticket. Before long we were drinking out of the same bottle until we were smoked and goofy and the number we came to was one.

Volta: an obscurity of poets is available to purchase here.
Posted by Andrew Hook at 09:26