A Preview Of Coming Attractions

My short story, "A Preview Of Coming Attractions", has just been made available on the excellent App from Great Jones Street, and as usual I'm blogging a few thoughts as to how the story was written. There may be spoilers for those yet to read it.

Great Jones Street is an App only magazine which has previously published my short stories, "Sarcoline", "Vole Mountain" (as reprint), and "Blood For Your Mother" (as reprint). It's a great resource for quality fiction and the App can be downloaded for FREE here.

I was approached by the editors with a request to write a piece of flash fiction for Valentine's Day and was eager to take part. I already had a title, "A Preview Of Coming Attractions", waiting to be written (although when I made a note of it I had no idea what kind of story it might be), and it seemed like a good starting point. I had the idea to write a piece from a female perspective, a reminiscence of sexual encounters, expanding and challenging throughout the years. Taking a lead from the title I decided to section the story within the parameters of movie classification, and as the publisher is American I decided to utilise the American classification system considering this would be more familiar to their audience (the story is therefore split into sections G, PG, PG-13, R and NC-17).

Regular blog readers will know I write to a musical background, and instinctively the song "Je t'aime...moi non plus" suggested itself as most appropriate. I prefer the Gainsbourg/Bardot version, but I also have the Gainsbourg/Birkin version. It struck me that I could use the subtle differences within the versions as part of the story itself, and so I played one version after another on repeat whilst writing (as indeed, my protagonist does whilst reminiscing). 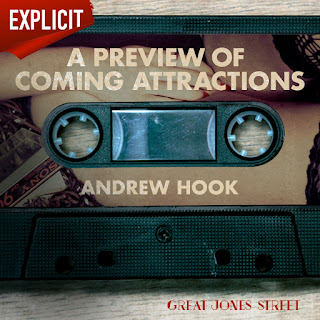 To say more about the story will give too much away - it is only 749 words in total, after all - but here's a brief extract:

I see his outline for the first time. An electric eel.

Bending my head I receive the only acceptable bruise for my age group.

The discolouration brands me. I wear a scarf indoors.

Sometimes, in fast cars, everything is a blur.

Overlooking the town, the lights, one of them is a mirror. The stars hold greater permanence, yet we are also them when viewed from another planet.

He will find me as a naked, treeless, deserted island.

Just one look is molecular disintegration.