In Which I Am Bookended By Comedians

Whilst I haven't blogged much for July I haven't been resting on my laurels. Over the past couple of months I've attended various events promoting various books. Here's a round-up of my activities:

This was an event at the Quad in Derby at which two books were being promoted, both edited by Johnny Mains. These were "Dead Funny", an anthology of horror stories written by comedians (co-edited with Robin Ince), and "Best British Horror 2015" (which, as it turns out, wasn't actually available on the day). I was reading from my short story, "Drowning In Air", which appears in the latter book, alongside Marie O'Regan who featured in Best British Horror 2014, and comedian Rufus Hound who appeared in the Dead Funny anthology.

We got to Derby early and had a bit of a stroll around before chatting with Johnny and organiser Alex Davis in the Quad bar before being joined by Marie and her partner, Paul Kane, together with writers Mark Morris and Robert Shearman. I spoke to Rob at length about being one of the World Fantasy judges this year - a role I had previously undertaken - and also the fact that Rufus Hound wasn't a real dog. 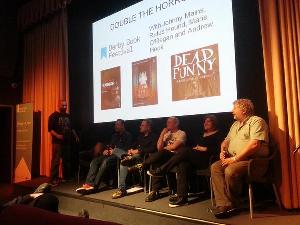 The readings seemed to go well, and Mark and Rob joined us on stage for a Q&A afterwards. Rufus seemed pleased as punch to be with literary folk and - unsurprisingly - his reading was quite a performance.

The following day was a Saturday and Sophie and I cycled the Monsal Trail in one of our favourite parts of the world, the Peak District. 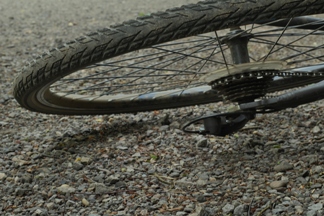 My neo-noir pulp crime novel, "Church Of Wire", was published earlier this year and I had arranged a book signing at the Diss Publishing Bookstore in Norfolk. The day didn't start well with torrential rain, the Diss one-way system, parking too far from the venue and having no change for the car park, and getting soaked going back and forth sorting it out. In contrast, the sales were good - it's surprising how many people don't flinch from paying £10 for a book by an unknown if they're interested in it. Big thanks to the store for putting on the event. 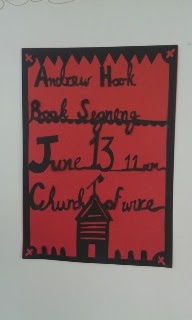 Back at the Quad in Derby for Edge-Lit 2015. This is an annual event for writers, readers, and publishers with the emphasis on workshops and 'the business' of writing. We arrived on the Friday afternoon and had a bit of a stroll before a few drinks and then a meal with Terry Grimwood, Ray Cluley, and Ray's partner, Jess. It was a gorgeous evening, and Derby managed to pull off a Mediterranean vibe that was quite impressive.

On the Saturday we had a dealer's table for my books and Fur-Lined Ghettos and we sold steadily throughout the day. I ran a workshop titled "Creating The Short Story: Character, Scene, Conflict" whereby each participant writes separate characters, scenes, and conflicts on pieces of paper which are then all mixed together with each participant then receiving one of each and finding the story that links them. Usually I run this to groups of around 8-10 people, however an astonishing 23 signed up for the event (although 17 attended on time and some latecomers couldn't be accommodated as the task was underway). It seemed to be a success.

Later that afternoon I was also a guest on a panel discussing the short story with Alison Littlewood, Kim Lakin-Smith, and Gav Thorpe (chaired by Adele Waring) which was also quite entertaining. 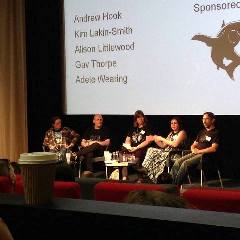 As usual, I spoke to a host of friends new and old at the event, too many to list here (you know who you all are). And as usual it was fantastic to be surrounded by so many creative types.

The official launch of Best British Horror 2015 was scheduled to take place at the Charing Cross Waterstones branch in London. As mentioned above, my story "Drowning In Air", is within the book, and whilst I was not reading this time around I still wanted to attend.

I arrived in London mid-afternoon and had a couple of leisurely drinks with Simon-Marshall Jones of Spectral Press, who is publishing my novella, "The Greens", next autumn. From there we wandered to the venue and chatted with Johnny Mains, Priya Sharma and her partner, Mark, and Victoria Leslie before the event began. The comedian Reece Shearsmith has a story in the book, but his reading consisted of a hilariously filthy reading of an abandoned League of Gentlemen script which included both genitalia and snails. As we lined up for the signing I found myself sitting next to Reece and recited the lyrics to The Resident's song, "Moisture", to him which were not dissimilar to his piece. We also chatted about the series "Inside No 9" (a third is being written as we speak). Charlie Higson also joined us and I mentioned his Norwich musical background (he doesn't get many requests to sing 'who stole my bongos' any more).

After the signing session there were readings from Alison Moore, John Llewellyn Probert, Priya Sharma and Stephen Laws before the chance for more chat and drinks. Funnily enough there were no Edge-Lit overlaps among the writers present and again I had the chance to chat with friends old and new before heading for the train.

All four events reaffirmed my belief in the human race. And interesting these four were unusually - for me - bookended by comedians. I imagine my involvement in the world of comedy will end with this brief dalliance, but just in case I'm called upon here's my favourite joke:

Q: What did one snowman say to the other?

A: Can you smell carrot?

I'll get my coat.