Why Don't Even The People You Expect To Read, Read?

I attended a local SF convention over the weekend, NOR-CON, where I had a dealer's table selling some of my own books as well as a lot of brand new paperbacks and hardbacks that I'd managed to accrue over the last twelve months. I must admit I wasn't expecting to sell much - it was a media convention and the large dealers room contained everything from lego spaceship toys, to displays including Robby The Robot and R2D2, to make-up artists, memorabilia specialists, comic books, and figurines. In fact, those stalls selling books were few and far between - not necessarily a bad thing. Sometimes it's better to sell books without competition, of course. Anyway, the thrust of the convention was its special guests from Dr Who, Star Wars, and Red Dwarf. This photo will give you an indication of what it was all about: 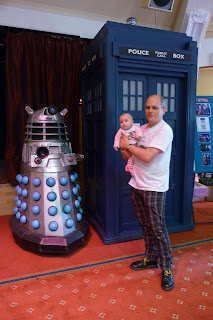 As well as the special guests who were genuinely from the TV shows and movies, there were a large number of lookalikes (or dressalikes in the cases where the costume concealed the face) either attending professionally or just for fun. We saw Predator, a short and stocky Batman, Superman, various Stormtroopers, Power Rangers, a couple of Supergirls, and Capt Jack Sparrow (aka Johnny Depp aka someone who looked a bit like him). Naturally, many of these costume-wearers took themselves seriously, which was hilarious. I even donned my penguin mask in an attempt to fit in.

Now, forgive me if I'm naive, but I had a feeling that those people inclined to be interested in the aforementioned TV shows and films, those people open to SF and therefore open to new ideas and mind-blowing concepts, those people geeky enough to celebrate that geekdom by narrowing their love of genre down to monogamous desire, might - just might - read books that were SF-related. Does that sound too much to ask?

Well, apparently it is. Don't get me wrong, I wasn't expecting people to flock to buy books by Andrew Hook (although there was a certain amount of interest in And God Created Zombies and I sold some of those), but I did expect the brand new books I had for sale by recognised SF/F/H writers to get some attention. What tended to happen, however, was for people to glance at the table with books on it, and then wander off. My only assumption is that it was the books themselves which weren't the attraction (in fairness, I sold two - Zoo City by Lauren Beukes to someone who picked up the book on three separate occasions before buying, and Kraken by China Melville by someone who only deliberated over it twice). Some people looked at the top book, but didn't peruse the spines of the rest - why is that? Only a couple of people actually looked at everything I had (other than the handful that bought).

So, why the aversion to books? In our visual media saturated society has television (or any of the contraptions upon which images can now be viewed) won out over books? Or is it something that is perhaps more worrying, in that many readers will only buy books by names that they know? Is no one willing to take a risk anymore. To find a gem by looking at a cover and reading a blurb without knowing the author who wrote it. I remember as a kid I would buy books and music based on visual appeal or intriguing blurbs. And in a genre which by it's very definition should be forward thinking and open to new ideas, the disinterest in books seems a tad radical.

And again, more worryingly, if mankind does not seek out new and unusual books other than those spoon-fed or familiar, then as a readership we will enter a narrowing cone of mental stimulation. Our choices will become less and less. For without some kind of market, the writers will give up. It's evolution in reverse.

So - please - read outside your boundaries, extend your feelers beyond your comfort zone. After all, we can't all be photographed with copies, can we? Where's the attraction in that? 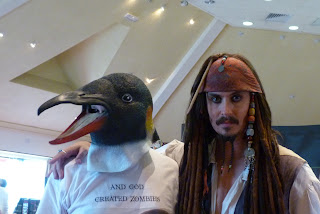