The True Meaning Of Punk

I watched an old Arena programme about Poly Styrene yesterday evening, which has recently been re-broadcast. Sometimes it's hard to believe that punk happened 36 years ago. For a start, I remember being much older than the 9 years that I was. And of course, it seems like yesterday. Watching stuff from the past could be all about nostalgia, but X-Ray Spex are just as relevant now than they ever were. Songs about the bombardment of consumer products, questions of identity and genetic engineering. These topics have remained vibrant but no one has heeded Poly's warnings and mankind's drive to attain 'product' as social status is worse than it has ever been.

Punk wasn't just about music. It wasn't just about fashion. It wasn't just about a sense of belonging. Whilst it incorporated these things, punk was really about being an individual and doing what you wanted to do despite the odds. I doubt I would be a writer if it wasn't for punk. I doubt I would have started publishing (Elastic Press, 2002-2009, RIP) if it wasn't for punk. And I doubt I would have recently started a new magazine (Fur-Lined Ghettos, http://www.fur-linedghettos.weebly.com/) if it wasn't for punk. First and foremost, punk had a 'go for it' attitude - and one that held more of an artistic bent than the capitalist 'go for it' attitude of the 1980s. The point with punk is that you weren't in it for the money - despite what the Pistols might have told you. You were in it because you had to be.

Of course, with my 9yr old perspective there was much about punk that passed me by. I bought my first single in November 1978 (The Stranglers, Five Minutes) at the age of 11. My first album (The Stranglers, Black and White) shortly afterwards. And it wasn't until November 1981 that at the age of 14 I went to my first gig (again, The Stranglers, at the Norwich UEA). Yet, in those formative years, watching Top of the Pops and through school playground conversations, punk and the DIY ethic obviously made an impact. And foraging through the Andy's record store secondhand racks a few years after punk's hey day I remember pulling out Germ Free Adolescents and knowing that I'd scored both a classic and a bargain. 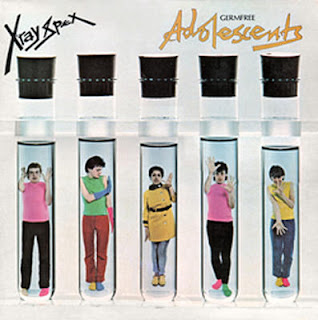 Germ Free Adolescents remains one of my favourite albums. It has a raw infectious energy. And Poly's lyrics speak to me directly: both poetically and vibrantly. Plus it's damn good to sing along to. Watching the Arena documentary, Poly comes across as easily bored. She adopts the Poly Styrene persona for the stage, yet backstage is unassuming - she wants no part of the 'pop star' lifestyle and is wary of being drawn into conversations with people she doesn't want to talk to. She wants to remain herself. Not to be sucked into the rock 'n' roll cliches. That's boring. She doesn't want others to have a part of her: it's the music and lyrics which are important. And the messages within. It's a refreshing and candid portrait of the artist as a young girl. 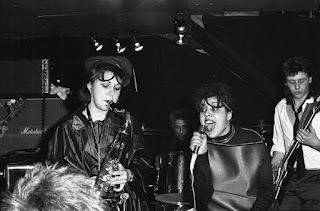 I was fortunate enough to see X-Ray Spex live at the Roundhouse for a one-off gig back in 2008. It was a shambolic performance but it was worth it. It was punk. It was a reminder of how disgustingly professional the music business has become and how important it is to get back to basics beyond branding and commercialism. Of course, Poly died through breast cancer on 25th April 2011, just as a solo album, Generation Indigo, hit the shelves. It's not the greatest album, but it is punk (not in any recognisably musical sense that people expect, not 'branded' punk, but punk in that it is Poly and Poly was punk). Because punk - true punk - isn't about nostalgia. It's about being you, now. And being you, always.