Something To Believe In

My short story titled "Something To Believe In" has just been published in Crossing The Tees (The Fifth Short Story Anthology). This is an anthology compiled of the shortlisted and winning entries to the annual Crossing The Tees competition. I rarely enter competitions, because there's normally a submission fee, however this one was free and I decided it was worth a go. And as usual I'm writing a few words discussing how the story came to be written. There may be spoilers within.

If you read my story, you'll notice there are several references to Ramones. The reason for this is simple, I originally wrote the story with the hope that it might be accepted for Gabba Gabba Hey: An Anthology of Fiction Inspired by the Music of The Ramones, published by Fahrenheit Press. Unfortunately it didn't make the book, so I was left to shop it elsewhere, however because Ramones were my starting point this explains the genesis of the story. I wanted a Ramones song title as the story title, and after discarding the obvious (Sheena Is A Punk Rocker, Rockaway Beach, The KKK Took My Baby Away, etc), I happened upon Something To Believe In. Here was a title I could work with. Combined with the title, I'd recently discarded the opening of a novel where one of the characters, Klein, becomes romantically obsessed with a girl he passes on his daily commute. I decided to have this character relate his obsession to another character, Streckfus, who we then follow through their own thoughts into a similar scenario which also shaped their life.  I wanted to explore how we map our could-have-beens onto other people, totally without their knowledge - or permission - and how transitory interactions can dominate regular thought.

With this simmering in my mind, I happened to rewatch the film Citizen Kane, which included this quote from one of the characters, Mr Bernstein: One day, back in 1896, I was crossing over to Jersey on the ferry, and as we pulled out, there was another ferry pulling in, and on it there was a girl waiting to get off. A white dress she had on. She was carrying a white parasol. I only saw her for one second. She didn't see me at all, but I'll bet a month hasn't gone by since that I haven't thought of that girl.

You can see how that fits my story perfectly. So much so, that I use it as an epigraph at the beginning. 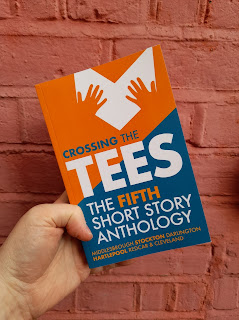 The piece is also a commentary on the male gaze, which, from a feminist viewpoint, is the masculine, heterosexual perspective that presents and represents women as sexual objects for the pleasure of the heterosexual male viewer. Whilst my story reflects this, it does additionally suggest that unknowingly to the female, it is herself who represents the powerful, and that the gaze can be purely idealised romanticism without the sexual imperative being to the fore or even present at all. However, my character, Streckfus, also acknowledges that: He was no different from Klein, appropriating others for validation, but equally blaming others for the shitshow his life became.

Crossing The Tees (The Fifth Short Story Anthology) is published through the Crossing The Tees Book Festival. It retails at £10.00 in paperback. There are thirty two contributors. I believe the book is widely available throughout the festival, and is also available through Drake bookshop.
As regular readers are aware, I write my short stories listening to music on repeat. In this case, throughout the entire writing session, I naturally played Ramones' "Something To Believe In" on a loop. Not sure how many times I heard it, but it was several. Here it is:
Posted by Andrew Hook at 07:23