Most readers of this blog will be aware that I've recently published a book about Luis Buñuel's 1962 film classic, "The Exterminating Angel", detailing how the film has resonated with me on a personal level as well as examining it's meanings and motifs. It was during research for the book that I became aware of an operatic adaptation due to be performed at London's Royal Opera House this month. Naturally, I was intrigued, and whilst I have no particular interest in that art form it became inevitable that I would see the production. This blog post will explore my thoughts on the opera.

For those who are unaware, Buñuel's movie centres on a group of socialites who retire to one of their houses for an after-opera soiree and who then - for inexplicable and unexplained reasons - find themselves unable to leave the drawing room at the end of the evening. Their social veneers are stripped away, revealing ugly interiors, until eventually after several days they are able to exit only to find themselves caught in a circle of repetition when attempting to leave a church after giving thanks for their escape. 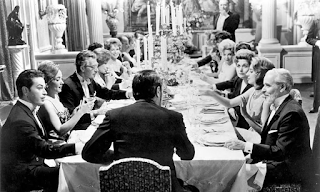 Buñuel's cinematography is fluid considering almost all the action takes place in one room and there are twenty-one cast members. Inevitably, the opera - as expected with any adaptation - doesn't stick rigidly to the film. The cast is much smaller; almost halved. Some of the characters have merged. The set design - with it's large arch representing the open doorway between the two rooms - is impressive. The live sheep - much promoted - make only a cursory appearance.

Initially the opera closely follows the film and adheres to much of the dialogue. There are small tweaks for a modern audience - a Jew becomes an anarchist - but the biggest problem I have with the opera is - well - the opera itself. Buñuel's film would be well-suited to a stage play, and effectively this is exactly what it is. Yet here dialogue is sung. This seems an obvious statement, yet unfortunately it lends the piece an unintentional comic overtone, because - realistically - there is no need for the dialogue to be sung other than the fact that it is an opera. The only differential between the film and the opera is the singing. Because of this, the singing seems absurd.

I appreciate this reflects my own bias. Having only once before been to an opera - over thirty years ago in Russia - I have no comparison with others of its type. However, dialogue appertaining to coffee spoons doesn't render well when sung - it's forced, not comic. The actual singing itself - apart from a few occasions where multiple voices intentionally lead to hysteria - feels superfluous. Without the surtitles - bearing in mind  the opera is in English - little of the dialogue was discernible. If reading the surtitles was akin to watching the movie in Spanish with subtitles, it also confirmed the pointlessness of the medium. This isn't an opinion purely confined to non-opera-aficionado me. Michael Tanner in The Spectator states: "What did the dialogue among the innumerable characters gain by being sung?" In addition, the accompanying music neither added nor detracted - and again, I must make excuses for my lack of orchestral understanding, but for this viewer, it added little to the performances.

And the performances were adequate. 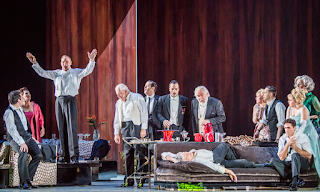 For those who know the movie well I thought there were a handful of deviations that were completely unnecessary. Buñuel's movie is explicit in our understanding that there is no physical reason for the guests' entrapment, yet twice the 'arch' flashed light suggesting some kind of supernatural barrier. I thought this undermined the surrealism. The hostess also tells the butler not to enter the room at a point before their situation is known - a moment which stopped me, not him. There is a reference to the opera's composer, Thomas Adès, which was awkwardly - embarrassingly - self-referential. In the movie, Buñuel's dialogue is crisp and matter-of-fact. Where the opera dialogue deviated from the original it was arch (see what I did there) and over-flowery, completely at odds with the rest of the production and in direct contrast to Buñuel's mastery. Two extended songs also added little, either dramatically or to advance the plot. From promising beginnings, the opera began to outstay it's welcome, and although having seen reviews elsewhere I now appreciate Adès musical deconstructions these were not apparent to the casual listener.

There are two dream sequences in the movie which I was intrigued to see translated for the stage. The first, featuring a disembodied hand, was well-replicated considering the difficulties. Following this, I had great expectations for the second sequence, but this never materialised - a lazy omission. Whilst that sequence is a montage of the guests' thoughts and possibly difficult to transfer to the stage, in my opinion those night-time reveries could have been screened direct from the film in a backdrop with the orchestra adding musical accompaniment on the ondes martenot. If, as an alternative, one of the dead cast members levitating Peter Pan-like from the stage was meant to compensate, I'm sorry to say that this erred on the wrong side of absurdity and was contrary to the spirit of the film. 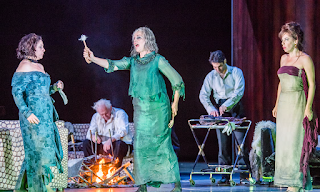 Criminally, near the end of the opera - when the guests realise they can exit the room - their egress occurs in a perfunctory manner as they drift through the arch individually as though in a daze, much unlike Buñuel's guests' surge of elation which is almost palpable on screen. This aberration undermined any tension, made it appear that the preceding events had been little more than an inconvenience. As an aside - and without too much explanation for those who haven't seen the film - the return of the servants also happened much earlier than necessary as they are integral to the restoration of order (their reappearance simply occurs at the wrong moment), and the goading of the child is much too explicit when compared to the subtlety of the film.

Now, I appreciate not everyone seeing the opera will have seen the movie, and few would have given it as close a scrutiny as I have, however there should be some faith in an adaptation to adhere to the intent of the original production, and whilst Adès "The Exterminating Angel" began positively I felt it digressed without due care and attention along the way, with the final moments scuppered without the humour of Buñuel's original church scene by further endorsing a perceived supernatural threat via the illuminated arch. Even putting the deviances aside, Thomas Adès operatic adaptation left so much to be desired, particularly with regards to his understanding of surrealism. A great shame, because on a superficial level I enjoyed the experience and found it interesting. Ultimately, however, the production left me wanting to revisit the film rather than kindling a desire for further operatic art forms. In "The Exterminating Angel" vs "The Exterminating Angel" it is the angel which is exterminated. 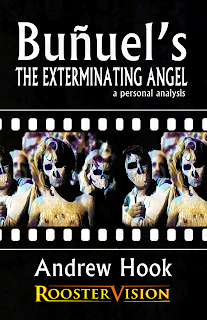 My book, "Buñuel's The Exterminating Angel: a personal analysis", is published by RoosterVision in both (reasonably priced) print and kindle editions.
Posted by Andrew Hook at 16:35