Beyond The Island Of The Dolls

My short story, "Beyond The Island Of The Dolls", was recently published in the anthology Postscripts To Darkness Volume 5, and as usual I'm blogging the gestation of the story for those who are interested. There may be spoilers if you have yet to read it.

The initial inspiration for the piece came after I discovered (online, rather than in person) the Isla de las Munecas situated near Mexico City. There's plenty of information about this island online, but the following photograph should give an idea as to why I was intrigued by this destination. Naturally I couldn't resist using the location for a story idea. At the same time, the title popped into my head. Naturally an adaption of "Beyond The Valley Of The Dolls" in a totally different context, I liked the association and also the use of the word 'beyond' because this tied in with how I wanted to work the story. 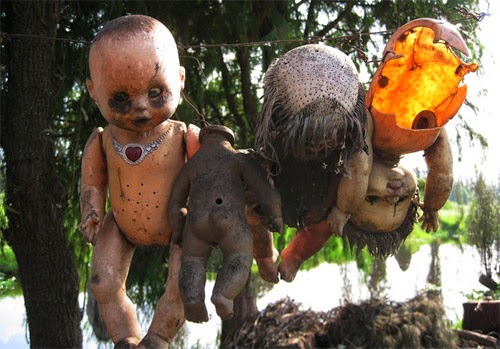 What I was loathe to do, however, was the obvious: some kind of doll-come-to-life story, or even a straightforward horror story. Whilst visually the island might appear creepy, research indicates the reason it looks that way is more about an individual managing grief. I thought it better to use the island as a metaphor, perhaps for catharsis for the main character, and in that respect an almost anti-horror story seemed appropriate. This thought coincided with guidelines I had seen for a Des Lewis edited anthology, Horror Without Victims, and I wrote the piece with that market in mind. Stories are volatile things, however, and towards the end of the piece it was clear that I was trying to shoehorn the story into the anthology's remit without it taking a more natural course. As it happened, Des rightly bounced the story, and I revised the ending and began sending it elsewhere.

In my piece, it is the loss of a child which sends my main character travelling, and the discovery of the island goes some way to assuaging guilt and coming to some understanding, whilst not totally solving the problem. Grief doesn't disappear overnight, if ever; it simply needs to be assimilated into experience. Coincidentally, the death of the child in my story was written without the knowledge of the death of the child in the 'legend'. It was only afterwards that the more immediate connection became apparent.

"Those dolls on la isla de la munecas," continued Esteban, "they appear horrific because of their physical state, because they remind us of children, because our minds find it hard to differentiate between the child and the doll. Yet they have simply been neglected. Those exact same dolls, when new, would have been on similar displays within the four walls of a department store. It is only out of context that they appear horrific. And our imagination does the rest."

If you have read the story and have any thoughts on it either way please feel free to comment.

Postscripts to Darkness Volume 5, featuring a stunning array of strange fiction and illustrations, is $18 CAD inclusive of shipping worldwide. See the store page at http://pstdarkness.com/buying-pstd-5/ to order and for more information. 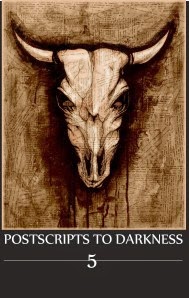