As regular followers of this blog are aware I have a certain fondness for animals of the long-snouted variety. Who wouldn't? I've tried to seek out some of the more extreme examples for previous posts, but those are becoming thin on the ground so I'm falling back onto one of my favourites, the Malayan tapir.

I used to have one of these as a toy animal back in my youth and I prefer the black and white markings to those of the other three varieties of tapir. There's something more honest, more other-worldly, about it somehow. See what I mean: 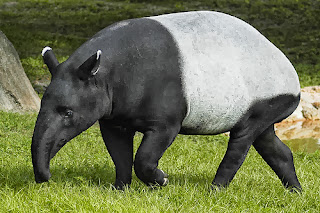 There's some interesting stuff on wikipedia about how the long snout has been accommodated: They have a large sagittal crest, a bone running along the middle of the skull that is necessary for muscle attachment. They also have unusually positioned orbits, an unusually shaped cranium with the frontal bones elevated, and a retracted nasal incision. All of these modifications to the normal mammal skull are, of course, to make room for the proboscis. This proboscis caused retraction of bones and cartilage in the face during the evolution of the tapir, and even caused the loss of some cartilages, facial muscles, and the bony wall of the nasal chamber. That seems quite impressive to me.

The facial structure is even more impressive when viewed face on, although it does lose the elongated look, of course. 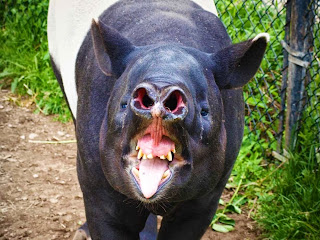 Perhaps the above photo is a little unkind, because they are a quite beautiful animal. Young tapirs of all ages have brown hair with white stripes and spots, but it's the monochrome adults which I prefer. And regardless of their overall cuteness, the predominant reason for including them on this blog is obviously the desirability of the elongated proboscis. I mean, just look at the length of that snout! 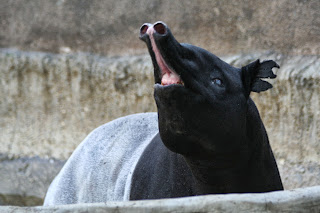 (Tapirs can be hired out as double-barrelled shotguns)