Haven't been able to blog for a while (did you miss me?) because we were on holiday. Now, holidays are pretty essential for my wellbeing. I work 11 days out of 14 in day jobs, not counting any freelance work or writing that I do in my spare time, and travelling is when I am happiest. In fact, I've said it frequently that I feel more at home travelling than I do when I'm at home. I get travelsick for travelling where others get homesick for home. Coming home for me is a big downer. I need to be on the move.

I spent a week in North Wales with my partner and our young child, together with my eldest daughter; and then we dropped off the kids with their respective grandmothers and did a 9 hour detour in the process to spend a second week in the Lake District. Believe me, that detour was worth it. I love my children, but remove them from the equation and BINGO! Anyone with kids will understand this.

In no particular order we saw waterfalls, castles, caves, beaches, mountains, The Village, generally breathtaking views, an assortment of wild animals, and other stuff I can't recall off the top of my head. Time stopped (for my views on travelling, immortality and the dislocation of time read my novel, Moon Beaver), and I incorporated two pilgrimages into the trips (more later). Along the way I took some cool photos and my partner took even cooler photos. A selection follows: 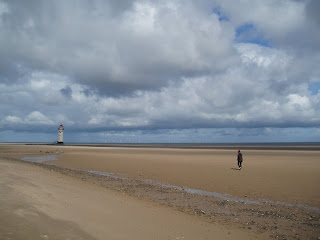 Here my teenage sprog advances on the windswept beach towards the lighthouse at Talacre, North Wales. The tide was out. Such an evocative place. Wales gave us an abundance of cool stuff, with Conwy Castle probably being our favourite destination. It also provided me with the destination of the first of my pilgrimages. Here's a clue: 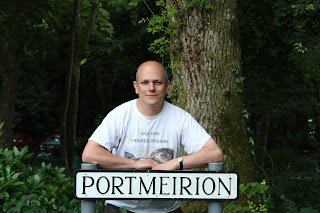 I first caught The Prisoner television series when Channel Four was launched in 1982. It was one of those series which captured my imagination and probably assisted my desire to write. Portmeirion has therefore been a destination I've wanted to head to for some time, and it didn't disappoint. I kept smiling as I realised I was in the Village. The beach was particularly memorable - I expected to see Rover at any moment. People pruning the trees felt sinister beyond the normality of their roles. I loved it.

Anyway, once the kids had been abandoned and we drove through the worst rain-drenched motorway traffic I've ever seen by the seat of our pants, we ended up in the Lake District. I'd only been here once before on a school trip and could remember none of it. The scenery was the most spectacular I've ever seen in the UK, reminding me in places of New Zealand's Milford Sound. Of course, you had to get away from the crowds which swarmed around Lake Windermere like wasps on ice-cream.

Whilst we were in the Lakes we visited Ulverston for the second of my pilgrimages, to Stan Laurel's birthplace and the Laurel & Hardy museum (less a museum than a collection of memorabillia, rather ramshackle but with a distinct charm), where we watched their classic "The Music Box" on the big screen. Laurel & Hardy repeats were often on TV in my youth and without a doubt they are magical. Here they deliver a piano to an address "right on top of the stoop" (I could probably quote the movie verbatim: "He doesn't want me. He wants the other monkey. You!"). Again, without Laurel & Hardy I would probably be quite a different person than I am today. Certainly more serious and not such an idiot. (example: we spent the last three days of the holiday speaking to each other only in daft American accents). 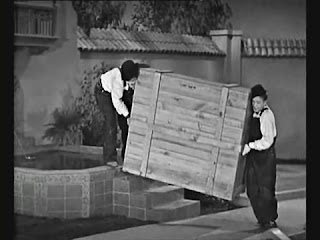 We're not great walkers, so the mountains availed themselves as scenery rather than obstacles to be mounted, nevertheless we did get off the generally beaten track and drove the often single-track loosely tarmaced stretch to Wasdale Head with its panoramic view of Scafell Pike and associated peaks. The day was dull and therefore perfect for this journey into an almost lost world scenario. I'll close with this photo from my partner cos it's the best of the bunch. Now just 50 weeks to wait for the next sojourn. 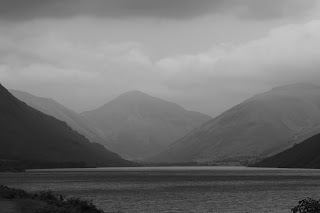