As well as spending a large part of my life writing fiction I've also dabbled in editing in one form or another. I was one of the fiction editors for the short-lived magazine White Noise, was the driving force behind the multi-award winning Elastic Press from 2002 til 2009, and also edited the fiction magazine, New Horizons, for the British Fantasy Society for a number of years. Putting books and magazines together is an interesting process, they take on a gestalt of their own, with the contents becoming more than the individual words on the page. If it were simply a matter of throwing stuff together the editing and selection process wouldn't be half as much fun, but seeing how the pieces interact as well as work independently can be very exciting.

I've blogged before that I'm now co-editing a magazine with my partner, Sophie. Well, I say editing, she's doing the bulk of it and I'm there for experience. The frustrating part of it is receiving material which doesn't suit the guidelines, and the satisfaction is when the writer hits what we want right on the head.

The first issue has almost sold out, and we've reduced the price from £5 to £3 for UK orders (including postage) to sell the remaining stock. Now issue two has just been published, and we've decided to price this one at £4 for UK orders although the page count is the same as issue one. Bargain! Overseas orders remain at £5 because we make so little on those copies due to postage.

Issue two has cover art by Simanion which looks like this: 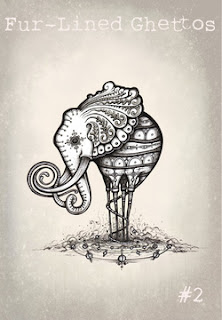 This issue features two short stories, by Daniella Geary and Douglas Thompson, together with poetry from Serena Cooke, Sean Thomas Dougherty, Peter Friedman, Howie Good, Kyle Hemmings, P A Levy, John W Sexton, Ryan Swofford and Steve Wheat. The poetry isn't any of that rhyming must-stick-to-a-specific-format stuff. It's gritty, surreal, adventurous, and not necessarily what you'd expect. Please consider buying a copy, because that way we can continue to do what we love to do. And in return you'll get some great stuff to read.