They say don't judge a book by its cover, which usually means if someone is physically ugly that doesn't mean that they are not pretty inside. Of course, the reverse is also true. The pretty can be ugly. But for this post I'm not really talking about people. I'm taking it literally. I'm talking books.


And of course, with books, most of us will judge the content by its cover.

Now, I don't know about you, but condensing the quality of around 100,000 words into one cover image which encapsulates the contents seems like a tough task. Yet its essential for publishers to achieve this to get the book from the shelf into someone's hands. Once there, other things can come into play: like the actual quality of the writing. But the springboard for the sale is the cover. Which begs the question, why are many of them so bad? 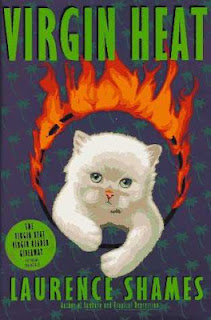 Branding comes into it, of course. Take the world's current obsession with "Fifty Shades of Grey". A novel which almost doesn't need a cover in order to be sold (copies are 'literally' walking out of the stores), but something ambiguous is needed rather than graphic for this subject matter. And it helps that all three covers of the trilogy look the same: 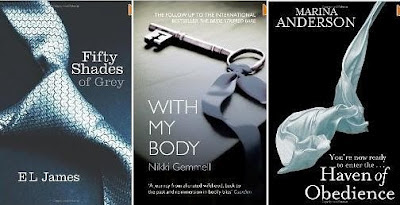 Oh! See what I did there. It isn't actually the Fifty trilogy, but it could be. It's certainly designed to appeal to the same audience, and with the Gemmell book if you bother to click to look inside on Amazon you'll see that the book originally had a different cover. It's no doubt been re-branded to appeal to the Fifty Shades of Grey audience. The publishers no doubt hope it might be confused with that book too. How similar the contents actually are I have no idea, but the intention is homogenisation which seems successful.

I'm hoping to use a similar design when I write my expose of corruption in the dog racing circuit: "Fifty Shady Greyhounds". But that's another story.

Independent publishers have limitations when it comes to budgets, of course, and many independent press book covers leave a lot to be desired. Considering most of their authors are unknown, the book cover is perhaps even more important than dealing with big name authors. For example, from 2002 until 2009 I ran Elastic Press, a publishing company dedicated to unknown writers' short story collections. We prided ourselves on our covers - most of which were interesting, if not all of them worked. My favourites are below:

Each of these tried to encapsulate the contents of the book. For example, "Milo & I" was a book of quirky crime stories, and the cover illustrates the title story yet also the theme for the book. Nick Jackson's collection illustrates how it's always worth asking a designer if they are happy for an image to be used. The central image in "Visits To The Flea Circus" is by Mark Mothersbaugh (lead singer with Devo, film soundtrack composer - including The Life Aquatic - and artist in his own right). Devo were one of my favourite bands, and browsing his website one day I fell in love with this image. Not only that - and more importantly - I knew it was perfect for the book. A quick email to his agent secured the image at no cost, other than a few copies of the book (which Mark later confirmed by webcam that he read on the toilet - fame at last!). Incidentally, the wallpaper background is just that - a scan of the wallpaper my parents had on their living room walls in the 1970s.

Of course, paying for artwork is always preferable for the artist, but in independent publishing there's usually not a lot of money around. And to reiterate, it's always worth asking. Perhaps serendipitously, similar to the Mark Mothersbaugh incident, my partner's favourite band is New Found Glory and we found that the lead singer, Jordan Pundik, does a bit of art and again there was a piece she bought which we then realised would be perfect for Fur-Lined Ghettos (our new magazine).

Again, it summarises the contents for us. And again, we were thankful Jordan was happy for us to use it. It goes to show that 'famous' folk are just as human and willing to share the outcome of their endeavours as the rest of us. And sharing art in this way brings both the books and their artwork to a wider audience.

I guess the crux of this blindingly obvious blog post is that the cover art really matters when getting someone to pick up the book. And this thought was kick-started today by Dean Harkness who has designed some of my own book covers and who now has some of his designs for sale as t-shirts here:

Right, I'm off to grab me an "And God Created Zombies" t-shirt. Another design that perfectly encapsulates the story within. Oh, and I mustn't forget to commission him for Fifty Shady Greyhounds... 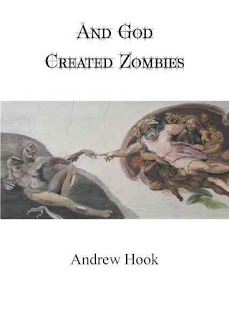